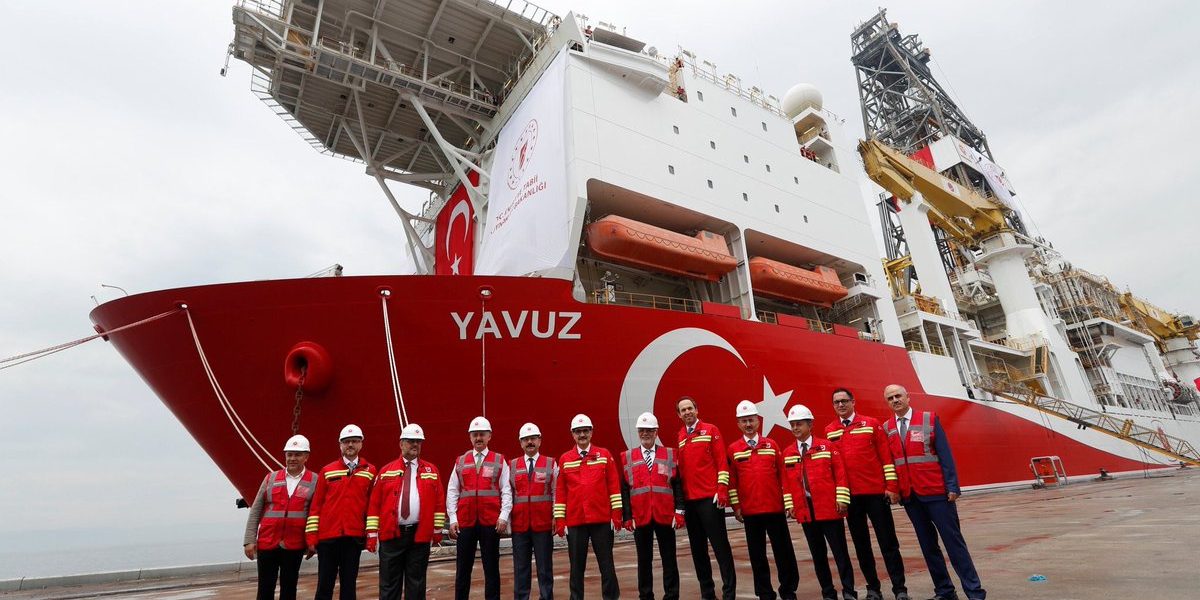 On Monday 8 July a second drillship, Yavuz, was illegally sent by Turkey into Cyprus’ Exclusive Economic Zone (EEZ), anchoring near the Karpasia peninsula in the island’s northeast. Turkey’s Energy Minister Fatih Dönmez has declared that it will begin drilling for oil and natural gas this week.

The President of the Republic of Cyprus, Nicos Anastasiades, has responded with a statement calling Turkey’s actions a violation of Cyprus’ sovereign rights under international law, referring directly to the UN Convention on the Law of the Sea (UNCLOS) which Turkey is a non-signatory of.

Through the drillships and warships sent into Cyprus’ EEZ, Turkey openly violates both conventional and customary obligations of international law, unilaterally engaging in bad-faith claims to territory which not only threaten prospects for an agreement on the EEZ but also the Cyprus issue in general.

The international community has been critical of Turkey’s actions, referring to them as illegitimate. The EU is considering suspending negotiations with Turkey on the Comprehensive Air Transport Agreement, reducing pre-accession assistance to Turkey and recommending to the European Investment Bank to review its lending activities in Turkey. High-level dialogues between the EU and Turkey may also be suspended for now.

The UK Foreign Office and US State Department have also publicly raised opposition to the drillships since Yavuz’ entry into Cyprus’ EEZ, and the Secretary-General of the UN António Guterres has stated tensions over hydrocarbons are a ‘concerning development’.

The President of Cyprus stated that, by ignoring international opposition to its actions, Turkey seeks to create a new ‘fait accomplis’.

In recent years, significant hydrocarbon reserves have been discovered in the Republic of Cyprus’ EEZ. In 2011, Noble Energy discovered 4.5 to 8 TCF of natural gas resources in the Aphrodite gas field. This was followed in February 2019 with American energy giant ExxonMobil and the Cypriot Government announcing the discovery of 5-8 trillion cubic feet (TCF) of natural gas inside Cyprus’ EEZ.

The Republic of Cyprus has exercised its internationally recognised sovereign rights in its EEZ and has licensed drilling permits to international energy companies who will begin drilling over the next few years. The House of Representatives passed a legal framework for the establishment of a Natural Hydrocarbon Fund, disconnecting natural gas revenues from public debt safeguarding it for all Cypriots of future generations.

The Government of the Republic of Cyprus has repeatedly invited Turkey to arbitrate the EEZ maritime border to settle the issue of claims, but Turkey has continually refused. This contrasts with Egypt (in 2003), Lebanon (in 2007) and Israel (in 2010) who have all bilaterally signed agreements with Cyprus on their respective EEZs.

Given disagreements and Turkey’s militarist and unilateral style of foreign policy, Fatih, or Barbaros in English, was sent in early May this year to begin drilling and exploration in Cypriot waters. It’s arrival around 60 kilometres to the west of Paphos, far beyond a maritime median line between Cyprus and Turkey, sparked backlash from the President of Cyprus, who likened it to a ‘second invasion’ in the same year as the 45th anniversary of the Turkish invasion, and internationally from the EU.

What must Turkey do?

The Republic of Cyprus’ and the international community’s condemnations and future punishments of Turkey’s activities must be heard and respected. Sustained action must now be taken to ensure:

45 years after Turkey invaded Cypriot soil with tanks and soldiers, they are now invading Cypriot waters with warships and drillships.

Therefore, we need everyone to ensure that their local MP is publicly speaking out and calling for action against Turkey’s continued occupation and illegal incursion into Cyprus’ EEZ, as well as highlighting why Turkey cannot have a role in a reunified Cyprus.

This issue does not only affect Cyprus. It is of particular interest to Cyprus’ closest neighbours and partners in the region such as Greece, Egypt, Lebanon and Israel. Cyprus is the gateway for Israeli and Egyptian natural gas to reach Europe and will help diversify Europe’s energy security in the years to come.

We’ve made it simple and easy to email your MP through our website: www.cypriotfederation.org.uk/mp. Our website will find your MP, their contact details and prepare a template email – it takes less than 30 seconds and can make a big difference for Cyprus!

“45 years after Turkey invaded Cypriot soil with tanks and soldiers, they’re now invading Cypriot waters with warships and drillships. The UK and the international community need to stand up to Turkey and its bullish actions! #HandsOffCyprus #standuptoTurkey”