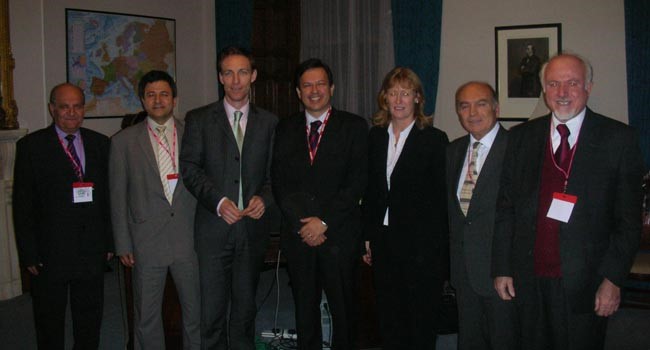 Peter Droussiotis, President of the National Federation of Cypriots in the UK, led yesterday a delegation, comprising the Federation’s three Vice Presidents and its Secretary, to a meeting held at the Foreign and Commonwealth Office with Jim Murphy MP, Minister for Europe.

The meeting was also attended by the British Prime Minister’s Special Representative on Cyprus, Joan Ryan MP and by Simon Horner, Team Leader of the Cyprus and Greece Team of the Europe Directorate General of the Foreign Office.

The representatives of the Federation expressed the UK Cypriot community’s alarm and dismay at the recent Strategic Partnership Agreement signed between Prime Minister Gordon Brown and Turkish Prime Minister Recep Tayyip Erdogan as this relates to Cyprus. They stressed that this Agreement entirely ignores the fundamental nature of the problem of Cyprus which stems directly from Turkey’s invasion in 1974 and its ethnic cleansing of more than 200,000 Greek Cypriot refugees from their homes in the northern part of the island which remains under Turkish military occupation more than thirty three years later.

The Federation delegation pointed out, amongst other things, that the United Kingdom, as a guarantor power of the independence, territorial integrity and security of the Republic of Cyprus, has not only failed to meet its obligations to Cyprus but, instead, appears bent on pursuing policies which have the effect of undermining international efforts to reunite the island, while rewarding Turkey for its continuing aggression.

Mr Murphy promised to take seriously into account the community’s genuine concerns in relation to the latest developments and reiterated his government’s official position that the so-called “Turkish Republic of Northern Cyprus” will not be recognised by Her Majesty’s Government which, according to Mr Murphy, remains fully committed to a comprehensive and durable settlement which is supported by a majority of Cypriots.

The parties agreed to maintain the dialogue and Mr Murphy accepted Mr Droussiotis’s invitation to a meeting of the Federation’s Secretariat in North London which will be arranged as soon as possible.

President of the Federation Peter Droussiotis said after the meeting which lasted approximately one hour: “We called upon Mr Murphy and the British Government to adopt a more balanced policy on Cyprus, to restate unequivocally its support for and commitment to the UN process laid down by the 8th of July 2006 agreement and to issue a policy statement calling upon Turkey to begin the immediate withdrawal of its occupation troops from the island and to respond positively to efforts to reach a comprehensive, just and lasting settlement.”

The Federation is an organisation representing Cypriot community associations in the UK, many of which are “special purpose federations” themselves. It encapsulates the largest Cypriot community outside Cyprus estimated at approximately 300,000, the majority of whom live in North London and its surrounding areas.