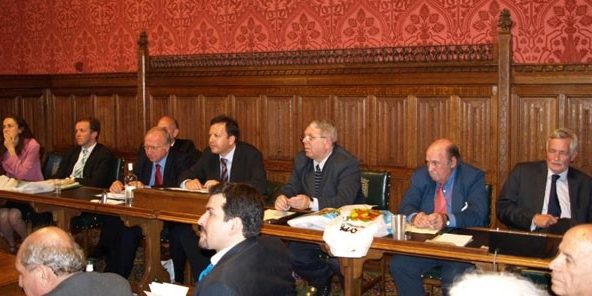 A well attended, truly multi-communal lobby of Parliament on Tuesday evening heard UK National Federation of Cypriots President, Peter Droussiotis, stress that a comprehensive and durable settlement of the Cyprus problem will benefit all Cypriots and that it is a goal for which all Cypriots and all friends of Cyprus should strive.

Mr Droussiotis also called on the UK Government to assert its influence in relation to the Cyprus problem and emphasised the need for Turkey not to be allowed to hold Cyprus to ransom as it seeks membership of the European Union.

The annual event, organised by the National Federation of Cypriots in the UK, was attended by Greek Cypriot, Turkish Cypriot and Maronite Cypriot community representatives in the UK and drew parliamentarians from all the major UK political parties, who were united in their demands for Her Majesty’s Government to increase its efforts in order to contribute more effectively to recent positive developments on the island, so that the opportunity to reunite Cyprus is not lost once again.

In his introductory speech, Mr Droussiots told the audience that Turkey had to accept its clear obligations under international law in relation to Cyprus and that the international community should not allow Cyprus to be used as a pawn by Turkey in the context of the latter’s EU accession negotiations.  He stated:

“The Turkish army of occupation in the north of the island must leave… Turkey [cannot] be permitted to keep Cyprus and its people hostage pending the outcome of its own application to join the European Union.”

Earlier this year, President of Cyprus, Demetris Christofias, stressed the influential role of UK Cypriots in efforts to reunite the island and Droussiotis took the opportunity to push the British Cypriot community’s message to Westminster:

“The British Government has a crucial supporting role to play in relation to Cyprus. It is time for all our friends in this Parliament to raise their voices against all those who seek to keep the island’s communities segregated and to speak out in support of the unity and independence of Cyprus for the benefit of Cypriots and not of any other parties.”

Politicians voiced their support for Mr Droussiotis’s positions. The Prime Minister’s Special Representative on Cyprus, Joan Ryan (Lab, Enfield North) spoke of the optimism that has emerged from the recent months and of the significance of the Memorandum of Understanding signed by Prime Minister Gordon Brown and President Christofias, whilst pledging the UK Government’s “full support” to on-going talks and pointing to the next planned meeting between President Christofias and Turkish Cypriot leader Mehmet Ali Talat on 25th July as a “momentous step”.

Alan Meale MP (Lab, Mansfield), co-sponsor of the event, spoke of the ‘bad deal’ that Cyprus has received, saying:

“The global community has conditioned the debate around Cyprus to a series of solutions which suit interests other than those of the people of Cyprus”.

David Burrowes MP (Con, Enfield Southgate) highlighted the issue of missing persons and the recent scientific work that has sought to shed light on the fate of missing Cypriots:

“Important landmarks have been passed in the last year but it’s not enough. There’s progress in the laboratories but people still seek the truth.”

He went on to talk of Turkey’s accession to the EU as part of the nexus of negotiations over Cyprus, stating firmly that “Accession must not come at the cost or sacrifice of Cyprus in any way”.

Mr Burrowes’ fellow Conservative frontbencher, Theresa Villiers MP (Chipping Barnet), spoke of how she had been encouraged during President Christofias’s recent visit to the UK and his meeting with her party leader David Cameron  MP, and went on to pledge her future commitment to the Cyprus cause, saying:

“I will continue to put pressure on Her Majesty’s Government and on to the institutions of the European Union to increase their efforts to find a solution to the Cyprus problem”.

Rudi Vis MP (Lab, Finchley & Golders Green) spoke out against Turkish intransigence, claiming that in his many years as a UK representative on the Council of Europe “I’ve never seen a Turkish representative give an inch on any issue”, as well as decrying the apparent failure of the international community to keep a focus upon UN resolutions on Cyprus. He concluded that a solution in Cyprus must “be found by Cypriots, between Cypriots, for Cypriots”.

Nigel Waterson MP (Con, Eastbourne, Willingdon and East Dean) described the Memorandum of Understanding as a “corner turned, which points the way to finding a positive solution”, whilst David Amess MP (Con, Southend West) said that recent events amounted to “a new beginning for Cyprus” and Andrew Dismore MP (Lab, Hendon) said that “Turkey is a key player and if Turkey says there’ll be no progress, there’ll be no progress”, a sentiment echoed by Bob Spink (UKIP, Castle Point).

“There must be no settlement in Cyprus without withdrawal of Turkish troops and without the Turkish side addressing the issue of Turkish settlers.”

Former MP for Tooting, veteran Parliamentarian and long-standing friend of Cyprus, Tom Cox called for perspective on recent events, warning that “unless I see the foundations of a settlement by the end of the year, I will feel that we are no closer [to a solution] that we have been over the last 34 years”.

Speaking after the event, Mr Droussiotis reflected on a constructive night of debate and discussion, thanking the participants but reiterating the need to increase pressure on HMG to do more, particularly in the direction of Turkey.

“We have enjoyed an intelligent discussion this evening and I thank all the participants on behalf of the Cypriot community in the UK. But discussion is empty unless those words are followed up with action. The National Federation of Cypriots in the UK and our member associations must not rest for one moment if we are to sustain the motivation of British parliamentarians to act on behalf of Cyprus’s just cause.”