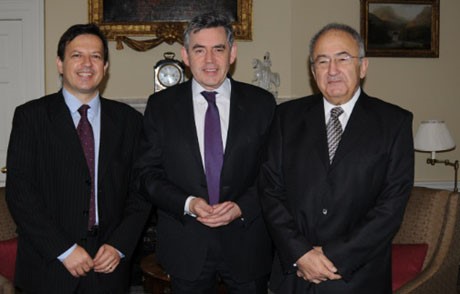 Prime Minister Gordon Brown today reiterated the UK’s support for negotiations over an end to the division of Cyprus at a meeting with the leader of the Cypriot community in the United Kingdom, Mr Peter Droussiotis, at 10 Downing Street.

Mr Brown, Mr Droussiotis (President of the National Federation of Cypriots in the UK) and Haris Sophoclides (President of POMAK – the World Federation of Overseas Cypriots) met to discuss Cypriot community relations, the Memorandum of Understanding signed between Cyprus and the UK earlier this year and developments around the direct negotiations now under way on the island which are aimed at reunifying Cyprus and its people.

Mr Droussiotis said that the meeting had been a much needed, positive re-engagement between the British Cypriot community and Downing Street:

“We had a warm and constructive meeting with the Prime Minister and we agreed to develop a more regular dialogue between the UK Cypriot community and the British Government. This initiative comes at a time of critical developments on the island of Cyprus.

I believe that a channel of communication between the UK Cypriot Federation and 10 Downing Street will help inform Her Majesty’s Government’s stance on the Cyprus problem. It will also enable our community, which is an integral part of British society, to enhance its contribution to the development of British domestic and foreign policy on so many issues of common interest and concern.”

Mr Droussiotis added that he was heartened by the Prime Minister’s enthusiasm for his Government to maintain a close dialogue with the Cypriot community in the UK.