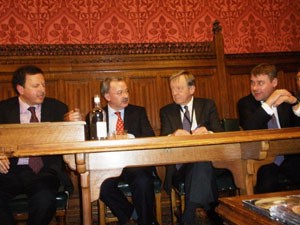 Parliamentarians from both houses and all major UK political parties last night cited the Obama presidency, forthcoming elections in the UK and Europe and Cyprus President Christofias’s resolve to settle the Cyprus problem as reasons for optimism in the search for justice.

A meeting hosted by the National Federation of Cypriots in the UK drew attendance and participation from many parliamentarians, some new to the Cyprus debate, some committed supporters and others who have returned to the debate, bolstered by what were described as credible reasons for optimism.

“As a community, we should be encouraged by the high attendance tonight of politicians from across the UK’s political spectrum. Support for Cyprus, from old and new friends in the British Parliament, is vital at this critical juncture of the direct negotiations between the leaders of the two communities on the island. The UK has the capability to play a constructive role through more active engagement on this issue with the new US administration but also by applying real pressure on Turkey so that the latter abandons its intransigent position.”

In his introductory speech, Mr Droussiotis thanked the twelve parliamentarians who had co-sponsored the event and called upon them and their colleagues to use their valuable influence on Her Majesty’s Government so that an equitable resolution of the Cyprus problem becomes a top foreign policy priority for Britain.

Sir Gerald Kaufman MP, a veteran supporter of the Cyprus cause, said that it is vital that the Cyprus issue be pushed to the top of the agenda in discussions between President Obama and Prime Minister Brown. Sir Gerald placed blame on successive Conservative and Labour governments for failing to act decisively enough on Cyprus and lamented the continuing division of the island which he called unacceptable.

Roger Gale MP identified the issues of settlers and Turkish troops as having received too little attention, whilst Lord Dubs called on UK Cypriots to use June’s European elections as an opportunity to lobby MPs and MEPs and party list candidates in order to raise the profile of Cyprus.

David Burrowes MP referred to the cautious optimism surrounding ongoing negotiations on the island but, at the same time, underlined the “scandal” of occupation and the need for British politicians to stand up to this in the interests of justice.

Alan Meale MP paid tribute to recently deceased Linda Koupparis and her work for the Cyprus cause, before calling for a proper and robust investigation into recent claims by Turkish actor Atila Olgac, following the latter’s confession on Turkish television, later retracted, that he shot dead Cypriot prisoners of war in 1974. Meale also said: “Britain owes Cyprus for what Cyprus has done over the last 100 years in support of Britain in two World Wars, Kuwait, Iraq and for Britain’s colonial occupation of the island”.

Lynne Featherstone MP expressed an interest in understanding better the concerns of her many Cypriot constituents in relation to Cyprus.

Shadow Minister for Europe, Mark Francois MP, praised the persistent lobbying of the National Federation of Cypriots on the Cyprus issue. He said that he would visit Cyprus in his Shadow Ministerial capacity in April and committed the Conservatives to helping to bring about a Cypriot solution, not to seek to impose one upon the island. He also took questions from UK Cypriot guests at the event.

Theresa Villiers MP, Shadow Secretary of State for Transport, also paid tribute to the Federation’s work in lobbying politicians and underlined the pivotal role that Ankara needs to perform in order to contribute to a lasting solution in Cyprus.

David Lepper MP said it would be wrong to allow Turkey into the European Union when it occupies the territory of a member state and went on to condemn the desecration of Greek Orthodox churches in the occupied are and to contrast it with the preservation of Muslim places of worship in the free areas of the Republic.

Tom Cox, a former MP and Cyprus stalwart, stated that “the Cyprus problem is not a complex one. It is very clear and has been since 1974 – it’s a question of invasion and occupation.” He called for the Prime Minister to make a clear and unequivocal statement of the UK’s policy on Cyprus.

Rudi Vis spoke of a forthcoming meeting with Joe Biden, US Vice President, in the context of a Council of Europe delegation, and went on to highlight Turkey’s intransigence on a range of human rights issues ranging from Cyprus to the Kurdish and Armenian communities in Turkey itself.

Simon Hughes MP identified the Obama administration, the Euro elections and the opportunities for Turkey’s EU accession as pressure points to be capitalised upon for progress on Cyprus. He asked if Europe cannot solve a divided nation within its own domain, how can the Europeans go around the globe criticising others for not dealing peacefully with their own regional conflicts.

David Amess MP stated his continued support for the Cyprus cause before the last speaker, Andy Love MP, paid tribute to Sir Gerald Kaufman’s efforts on Cyprus over decades and to President Christofias of Cyprus for making a solution to the Cyprus problem “the centrepiece of his manifesto and placing it at the soul of his government’s agenda”.

Mr Droussiotis closed a successful meeting by thanking the speakers, welcoming their and the audience’s participation in a constructive debate and acknowledging the presence at the meeting of the Cyprus Desk team from the Foreign and Commonwealth Office.