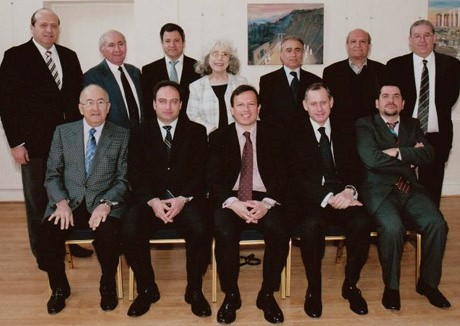 The Cyprus Government Spokesman, Mr Stefanos Stefanou, arrived in London on 28th March 2009 for a two day visit. His packed schedule included an address at the “Cyprus National Day” and “Greek Independence Day” annual commemorative event organised by the Federation and a working lunch with the Executive of the Federation and the High Commissioner and the Consul General of the Republic of Cyprus in the UK. The main purpose of his visit was to deliver a lecture on “The need for solution to the Cyprus Problem and related current developments” at the London Metropolitan University. The event was organised by the Cyprus Centre of the University in association with EPISTEME – The Association of British Cypriot Professionals – under the auspices of the Federation. The lecture was attended by a large and diverse group of UK Greek and Turkish Cypriots, including numerous community representatives, UK Cypriot and other British academics, Eddie O’Hara MP, UK Cypriot media and the Cyprus High Commissioner, Mr Alexandros Zenon, and his aides.

The event at the London Metropolitan University, held on 30th March 2009, was chaired by Professor Robert McKeever, Head of Department of Law, Governance and International Relations of the University.

“The Cyprus problem is, in effect, a problem of the invasion and illegal occupation by Turkey of a large part of the territory of the Republic of Cyprus. It is a problem of violation, on the part of Turkey, of the principles of international law but also of the human rights and basic freedoms of the Cypriot people.

“The international community, if it is to serve the cause of stability and security, is obliged to continue to work towards a solution to the Cyprus problem which will do away with the occupation, restore the integrity and the unity of the Republic of Cyprus, as well as the basic freedoms and the human rights of the Cypriot people as a whole, Greek Cypriots and Turkish Cypriots.

“The key to the solution is in the hands of Ankara and the solution needs her cooperation and consent to be achieved. The solution, apart from serving the vital interests of the Cypriots, can also serve the vital need of the pro European forces in Turkey to have Turkey accede to the Union. Turkey’s accession is an important factor in the political survival of the ruling party in Turkey but also of Mr Erdogan himself. Consequently, there is a serious motive for Mr Erdogan and his party to cooperate in the solution of the Cyprus problem.

“I hope that it has become clear that the Cyprus problem has not been resolved and remains open not due to the absence of a satisfactory basis and framework but due to the lack of political will on the part of the Turkish side. If the Turkish side decides to implement the resolutions on Cyprus and the agreements between the two communities, if Turkey decides to end her unlawful behaviour in Cyprus, the Cyprus problem will be solved.

“The President of the Republic, Mr. Demetris Christofias, will continue to work hard for the achievement of a solution remaining committed to principles, exhibiting decisiveness but also the flexibility necessary in the negotiations. His vision is that Cyprus and her people be reunited in conditions of permanent peace and security and for the country to become a bridge of cooperation in the region.”

At the end of the lecture, Mr. Stefanou answered a wide range of questions covering many aspects of the Cyprus Problem as well as the role which must be played by Turkey, the United Kingdom and the international community in efforts to reunite Cyprus.