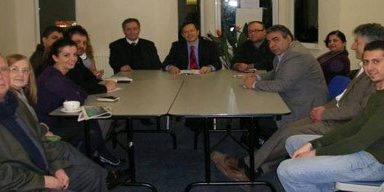 On Monday 23 March, Federation President Peter Droussiotis was warmly welcomed by UK Turkish Cypriot groups at the North London headquarters of the Turkish Cypriot Community Association (“TCCA”), at a meeting which he had been invited to address.

The event, hosted and chaired by Mr Ilker Killic, Chair of the Cyprus Republican Turkish Party (CTP) (UK), was attended by a number of key London based CTP members, as well as the elected representatives of various UK Turkish Cypriot groups, including the Chair of the Turkish Cypriot Democratic Association, Mr Hasan Raif, the Chair of the Management Committee of the TCCA, Mrs Türkay Hadji-Fillipou, Enfield Labour Councillor Ahmed Oykener, prominent British Turkish Cypriot academic Alev Adil, Head of Department of Creative, Critical and Communication Studies at the University of Greenwich and Turkish Cypriot newspaper Toplum Postasi journalists. The meeting was followed by dinner at the TCCA’s “Cyprus Kitchen”.

After the meeting, Mr Droussiotis said:

“It was an honour and privilege to address such an important part of the Turkish Cypriot community in London. The need for all UK Cypriots to work actively together, in support of the current crucial efforts of the leaders of the two communities on the island to reunite Cyprus, was the key message of my talk and our discussion. I was delighted that this message was warmly received by my Turkish Cypriot friends. We have agreed to broaden our dialogue and to take concrete steps so that the British Cypriot diaspora can make this happen.”