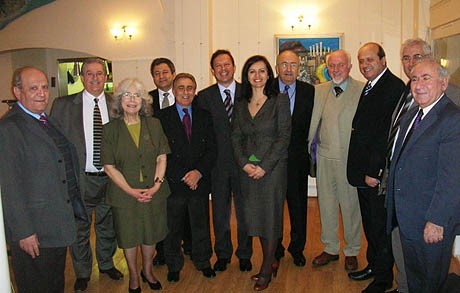 Minister for Europe, Ms Caroline Flint MP, last night spoke of her optimism for a solution in Cyprus and underlined the significance that the Cyprus problem has on the British Government’s foreign policy agenda.
At a dinner meeting hosted by the President and the Secretariat of the National Federation of Cypriots in the UK, Ms Flint said:

“A workable and lasting solution to the division of Cyprus is a very high priority. There are strong cultural and community ties between Britain and Cyprus, as well as very strong business and trade links. All of these links will be strengthened by a settlement.

“The talks between President Christofias and Mr Talat have provided a new impetus and momentum on the path towards a settlement.

Ms Flint went on to say that a great responsibility also lies with Turkey, saying that Ankara “needs to provide more visible and practical support”, adding that she and the UK government had pressed this message strongly with the Turkish government.

The President of the National Federation, Mr Peter Droussiotis, chaired the meeting and opened discussions by talking of his own hopes for Cyprus in the context of on-going negotiations between the two leaders. He said:

“British Cypriots have been encouraged by the Minister’s active engagement with the issue of Cyprus in the last few months. They believe that the commitment shown needs to be translated into real and persistent pressure applied on Turkey so that the latter takes the steps necessary to meet its obligations on Cyprus.

He added: “These obligations include specific and very clear requirements set out in the EU’s Turkey Negotiating Framework at the core of which is the need for Turkey to work for a comprehensive settlement of the Cyprus problem ‘within the UN framework and in line with the principles on which the Union is founded’.”