UK Cypriots assured of Conservative support for a reunited Cyprus 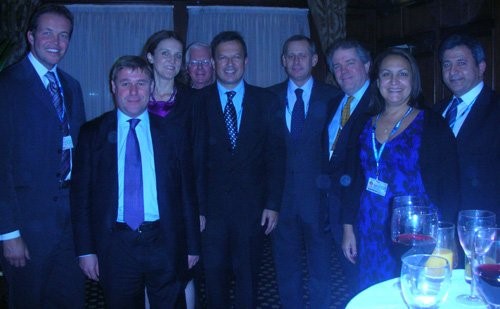 British Cypriots at the Conservative Party‘s annual conference in Manchester were last night assured of the party’s commitment to the delivery of a comprehensive settlement to the Cyprus problem.

At a fringe event organised by the group “Conservatives for Cyprus” and Federation member organisations Democratic Rally (DISY) UK, which is the Conservative Party’s sister party on the island, and the Greek Cypriot Brotherhood, the Shadow Minister for Europe, Mark Francois MP, emphasised that a reunited Cyprus is an objective of his party and pledged his personal support to current efforts to reach a negotiated settlement on the island. He spoke of his visit to the island earlier in the year and said that compromises were needed by both communities in order to arrive at a mutually acceptable solution, but pointed out that Ankara’s role was also vitally important in this context.

The National Federation of Cypriots in the UK was represented at the event by its President, Mr Peter Droussiotis. His address focused on the need for UK parliamentarians and friends of Cyprus, from all of the main parties, to work actively with the UK Cypriot community in support of Cyprus President Demetris Christofias’s “unstinting” efforts to reunite the country and its people, during this critical period in the island’s history, saying:

“We believe that the UK is eminently well placed, by virtue of its strategic relationship with Turkey, its powerful membership both of the UN Security Council and the European Union, and, of course, because of its historic responsibilities to Cyprus, as a guarantor power, to exert real pressure on the Turkish government so that Turkey finally accepts the need for a comprehensive settlement that is based on the principles endorsed by the Memorandum of Understanding signed between the UK and Cyprus last year, and which reflects the values and norms of the EU, which Turkey itself is seeking to join,  as well as international law. The benefits which would flow from such a solution would be huge for all interested parties and for the entire region.”

He also stressed that Turkey’s role is decisive because of its continuing military occupation and colonisation of the northern part of Cyprus.

Similar sentiments were expressed by Mr Andreas Papaevripides, DISY UK Chairman and Vice President of the Federation who also spoke at the event.

Also present at the event were the Cyprus High Commissioner to the UK, His Excellency Mr Alexandros Zenon, and his deputy, Mr Demetris Hatziargyrou.

Mr Droussiotis and Mr Papaveripides later met and pressed the case for Cyprus’s unity to Shadow Foreign Secretary, William Hague MP, who was guest speaker at the conference international reception.