Twenty years after Berlin reunites, the division of Cyprus and its capital Nicosia still shames Turkey 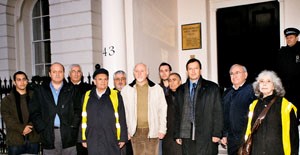 British Cypriots yesterday demonstrated outside the Turkish Embassy in London in opposition to Turkey’s continuing military occupation of northern Cyprus. The action marked the 26th anniversary of the illegal unilateral declaration of independence by the occupation regime in northern Cyprus.

Organised by the National Federation of Cypriots in the United Kingdom, the demonstration attracted Cypriots and friends of Cyprus from across the United Kingdom. Representatives from many of the Federation’s member associations and a large number of UK Cypriot students, representing EFEK UK (the Federation of Cypriot Students in the UK), as well as a strong contingent of young British Cypriots under the banner of NEPOMAK (the organisation of Young Overseas Cypriots) showed their resolve against the illegal occupation and the self-proclaimed pseudo-state which remains unrecognised by all countries in the world except Turkey.

The President of the National Federation of Cypriots, Mr Peter Droussiotis, led an eleven-strong Federation delegation to deliver a petition to the Turkish government, calling for the withdrawal of its troops and active and tangible support for the ongoing reunification negotiations. As with previous demonstrations, Turkish embassy staff refused to receive the petition. Instead, Turkish officials communicated with the delegation via British police officers who advised the Federation President that the petition could be inserted under the Embassy’s front door provided that this was not filmed.

“The Turkish Embassy’s refusal even to accept a simple petition from the leadership of our community in the United Kingdom is highly symbolic of Turkey’s continuing intransigence over Cyprus.

“Twenty years ago this week, the Berlin wall fell and mainland Europe was reunited. It is now more than 35 years since Turkey invaded Cyprus and, tragically, we still have a dividing wall keeping Cypriots apart in their own country which is now a full member state of the European Union. Incredibly, we have military occupation of the territory of a European Union member state by a country that aspires to become a member of that Union.

“The whole world, with the exception of the occupying power, Turkey, rightly refuses to recognise the so-called ‘Turkish Republic of Northern Cyprus’ because it so blatantly breaches international law. The passing of time will not make this pseudo-state any less illegal or any less abhorrent. It is long overdue for Turkey to relinquish its intransigent position and show real commitment to the island’s reunification as one independent country. It is high time for the tragedy of the Cypriot people to come to an end. ”

The demonstration came only days after France’s Europe Minister, Mr Pierre Lellouche, stated his support for reunification talks and referred to the anomaly of an EU candidate country, Turkey, refusing to recognise a member state, saying “this cannot go on forever”.