Minister for Europe, Chris Bryant MP, calls for an end to the “tragic division of Cyprus” 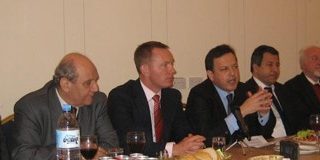 The Government’s Minister for Europe, Chris Bryant MP, has described the division of Cyprus as tragic and unacceptable and has called for it to be brought to an end.

Addressing the Secretariat of the National Federation of Cypriots in the UK at a dinner in North London on Wednesday night, the Minister urged the two sides in the direct negotiations currently taking place on the island to bring about a “catharsis” and to work for a comprehensive settlement that will bring peace and prosperity for all Cypriots in a reunited island.

Mr Bryant made it clear that such a settlement would have to be based on a bi-zonal, bi-communal federation. He said: “We have to be talking not about a confederation but about a bi-zonal, bi-communal federation with one international identity – absolutely clear.”
He also emphasised the need for Cypriots to look to the future rather than the past and stressed that a solution must be reached by the two communities on the island without any interference from other parties. At the same time, he recognised Turkey’s key role and the influence it wields in relation to Cyprus and called on Turkey to support the process of negotiations through practical steps.

He told the meeting: “The Turkish side must make concessions, make headway, they have to show confidence building measures, not just so as to build confidence but actually in order to improve the situation on the ground.”

He continued: “The additional Ankara Protocol has to be observed and I made that quite clear when I visited Ankara two weeks ago. I say it to my counterpart, Mr Bagis at every opportunity. I know that Gordon Brown says it to [Turkish Prime Minister] Mr Erdogan, that David Miliband says it to [Turkey’s Foreign Minister] Mr Davutoglu. It’s part of what we are constantly saying and will continue to say.”

Mr Bryant cited the opening of the Limnitis crossing as an example of a confidence building measure that can and should be taken without further delay. He added that the British Government would do all it can to facilitate a positive outcome but that it would not interfere in the current negotiations nor would it take sides because, he argued, such interference would be counter-productive.

“We have plenty of history of Britain telling Cyprus how to run its affairs. It helps nobody. And if any element of the Treaty of Guarantee is an obstacle to a settlement negotiated by the two sides, Britain will not stand in the way of a solution.”

The Minister also praised the courage and commitment that President Christofias and the Turkish Cypriot leader Mr Talat have shown in pushing ahead with direct negotiations aimed at the long overdue reunification of the island.

Introducing the Minister, Federation President Peter Droussiotis, welcomed Prime Minister Gordon Brown’s personal interest in the Cyprus problem as well as the Minister’s engagement with the issue and called for the British Government’s statements and the Memorandum of Understanding that the Prime Minister signed with President Christofias in June 2008 to be translated into concrete action:

“Turkey’s legacy on the island is hindering and preventing the negotiations from succeeding. Turkey must be held to account for its continuing disregard for the rule of law and the United Kingdom, as well as the European Union and the international community generally, must exert real pressure on Turkey so that the latter works constructively for a comprehensive settlement within the UN framework and in line with the EU founding principles.”

He concluded: “British Cypriots have a simple question: what will the UK – a country with a significant stake on the island as well as obligations to the Cypriot people – do, in practice, in order to impress upon Turkey the need for it to support a settlement based on the principles of a federal state with a single sovereignty, international personality and a single citizenship? British Cypriots need assurances that the UK Government will press Turkey hard on this matter.”