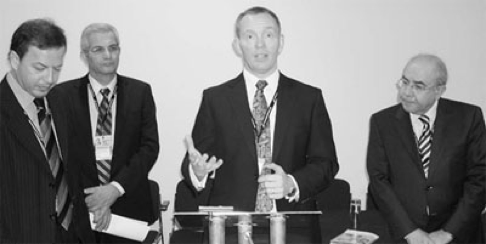 Labour Party politicians and members last night showed solidarity and support for the reunification of Cyprus at a fringe reception at the party’s annual conference in Manchester.

Organised under the auspices of the National Federation of Cypriots in the UK and addressed by Chris Bryant MP, Shadow Minister for Europe, Andros Kyprianou, General Secretary of AKEL and Yiannakis Omirou, President of SK EDEK, the event was honoured with the presence of MPs old and new, as well as local government representatives and conference delegates.

In opening the speeches, Mr Peter Droussiotis, President of the Federation, said:

“This reception should be a celebration of the 50th anniversary of the Republic of Cyprus which we mark this year and, in many respects, it is. Unfortunately, it is also a sad reminder that we gather here, once again, in the shadow of the island’s continuing division which we desperately want to see replaced with a reunited, peaceful and really independent Cyprus for the benefit of all Cypriots.

“We, British Cypriots, are fully supportive of Cyprus President Demetris Christofias in his really strenuous efforts and the principled flexibility he has shown in the direct negotiations. We will not give up the just struggle to reunite the island on the basis of democratic values. In this vital effort we need the help of principled and influential friends in the Labour Party to help overcome Turkey’s intransigence and bring this about.”

Chris Bryant MP, Shadow Minister for Europe, is likely to relinquish his post as part of the reshuffle that the Labour Party’s new leader, Ed Miliband MP, will make subsequent to the party’s forthcoming Shadow Cabinet  elections, but he spoke of his personal commitment to the reunification of the island whilst in his post, both in government and opposition. He added that, under Mr Miliband’s stewardship, he expected that Labour would continue to press for justice in Cyprus holding the Government to account to “bring about the solution that all Cypriots deserve and are long overdue”.

Andros Kyprianou, General Secretary of AKEL, conveyed his party’s commitment to a solution which will serve the interests of both the Greek Cypriot and the Turkish Cypriot communities and emphasised AKEL’s strong support to President’s Christofias efforts to deliver a just and lasting settlement. He added:

“The future of our island depends upon the current negotiations but Mr Eroglu does not operate alone… Ankara is central to the search for a solution. Only whenTurkey abandons its unwillingness to find a solution in Cyprus will we see the biggest hurdle to progress overcome.”

Mr Omirou, President of SK EDEK, opened his address by welcoming the election of Ed Miliband MP as Labour Party Leader before stating that the government of the Republic of Cyprus had “exhausted all possible areas of compromise in negotiations with the Turkish Cypriot side in negotiations.” He went on to identify negotiations about Famagusta as an example of how Turkish and Greek Cypriots would benefit equally from a settlement on the island.

The event was also attended by the Federation’s Vice-Presidents, Chris Stylianou and Michael Kashis, Federation Secretary Bambos Charalambous and Executive Secretary Andreas Karaolis, as well as Federation Executive members Suzy Constantinides (who is also the Chair of the Cypriot Womens’ League) and Neophytos Nicolaou.