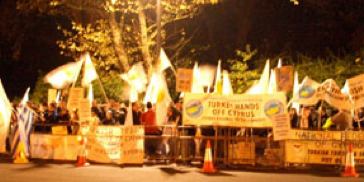 British Cypriots last night called on Prime Minister David Cameron to ensure that the United Kingdom honours its treaty obligations to Cyprus and applies real pressure on Turkey so that the latter works with sincerity towards a just and comprehensive settlement for the benefit of all Cypriots.  At the same time they reminded Turkey, through her UK Ambassador, that the puppet regime in the northern areas of Cyprus occupied by the Turkish army could never be made legitimate.

In successive, well-attended demonstrations outside Downing Street and later outside the Turkish Embassy in London, generations of Cypriots living in the UK made their voices heard on the twenty-seventh anniversary of the illegal unilateral declaration of independence by the unlawful regime installed in the occupied area of Cyprus by Turkey.

Organised by the National Federation of Cypriots in the United Kingdom, the demonstration attracted Cypriots and friends of Cyprus from across Britain. Representatives from many of the Federation’s member associations and of UK Cypriot students showed their resolve against the illegal occupation and the self-proclaimed pseudo-state, which remains unrecognised by all countries in the world except Turkey.

“The essential purpose of the illegal administration in the occupied area, which is entirely dependent on and subordinate to Turkey, is to provide a fig leaf for the Turkish state and its intractability in relation to the UN facilitated negotiations currently under way, whose purpose is to find a just and lasting settlement for all Cypriots.

“The Cyprus problem is one of invasion and occupation by the Turkish army, not merely an inter-communal dispute, as Turkey would like to portray it. For more than thirty six years since Turkey’s army invaded the island, Turkey has deliberately colonised the area under her illegal occupation, unlawfully moving tens of thousands of mainland Turks to live in the areas it has seized by naked force, as part of a deliberate strategy to change the demography of the island and impede a solution for Cypriots by Cypriots.

“The British Cypriot community shall make its voice heard even though powerful forces want to sell Cyprus down the river in order to appease Turkey, on account of her perceived geopolitical and economic importance. This is a principled struggle for peace, justice and human rights and it is the common struggle of all Cypriots who believe in a free, truly reunited and democratic island within the European Union.”

National Federation of Cypriots’ resolutions, setting out the illegality of the so-called “Turkish Republic of Northern Cyprus” and demanding a free and united island, were submitted to Downing Street and to the Turkish Embassy. The resolutions call for Britain’s active support, for an end to Turkey’s military occupation and for the Turkish Government’s active, meaningful and constructive engagement with the Cypriot-led talks to reunite Cyprus.