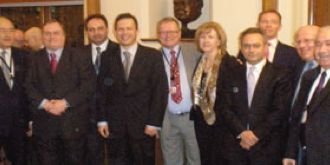 British Parliamentarians last night voiced their strong support for efforts to reunite the island of Cyprus, at a dinner-discussion held in the Houses of Parliament by the National Federation of Cypriots in the UK, with guest of honour the Cyprus Government Spokesman, Mr Stefanos Stefanou.

Leading UK Cypriot community representatives at the event were also joined by Mr Averof Neophytou, Chairman of the Cyprus House of Representatives Foreign Affairs Committee, who was visiting London on official parliamentary duties.

An “off the record” discussion on recent developments and future hopes for Cyprus illustrated the breadth and strength of opinion on the subject and highlighted the keen interest that the issue enjoys among political circles in the UK.

The event, which was sponsored by Alan Meale MP, commenced with a welcoming address from the UK Cypriots’ Federation’s President, Mr Peter Droussiotis, who thanked parliamentarians for their long-standing support to the cause of a reunited Cyprus and emphasised the importance of the role of the United Kingdom in the face of Turkey’s continuing intransigence on the issue.

“Turkish positions, on issues of substance, since the new Turkish Cypriot leader Dervis Eroglu took over last year, deviate completely from the agreed basis of the negotiations, which are meant to lead to a federal state with a single sovereignty, one international personality and a single citizenship. Incessant references by Turkish ministers that two states and two peoples are the parameters for a solution are entirely contrary to the UN framework.

Cyprus Government Spokesman Mr Stefanou, in his own address, stressed that the termination of the Turkish occupation and the de facto division of Cyprus is an imperative need of our times, adding that new initiatives need to be taken to the negotiating table, in order to rejuvenate the momentum for a solution.

Mr Stefanou pointed out that the continuation of Turkey’s occupation violates the human rights and the basic freedoms of both Greek Cypriots and Turkish Cypriots, adding that it also impedes Ankara’s accession course to the EU.

“Without the solution of the Cyprus question and with the continuation of the occupation, Turkey cannot hope to accede to the EU,” he said, adding that a solution would relieve Turkey from a tremendous burden that it carries with regard to its European aspirations.

He further noted that President Christofias is consistently submitting proposals at the negotiating table that are fully in line with the logic of a bi-zonal, bi-communal federation, including the interrelated discussion of the chapters of property, territory and settlers, which are objectively related with each other, as well as the return of the legal residents to the fenced-off city of Famagusta, and the operation of the city’s port under the auspices of the EU, so that Turkish Cypriots could develop trade relations with the Union.

“It is certainly not true that the Greek Cypriots allegedly don’t want a solution because they have acceded to the EU” Mr Stephanou said. He stressed that this claim by Turkey is not true, since EU accession did not put an end to the refugee problem, their repatriation, the illegal colonisation of the occupied areas and the withdrawal of the occupation troops.

Concluding his speech, Mr Stefanou noted that the time is ripe for a solution and underlined Turkey’s critical role, as mentioned at the 2009 and 2010 EU Council Conclusions. He said that Turkey must understand that the Cyprus issue is not simply a problem for Cyprus and the Cypriots, but that it is also Turkey’s problem and emphasised that the solution of the Cyprus question can become a win-win situation for everybody.

The ensuing discussion, held under the Chatham House Rule*, ranged in its scope from the role of Turkey and Britain’s treaty obligations to Cyprus to the failure of successive UK governments to apply adequate pressure on Turkey and the main stumbling blocks to a negotiated settlement, and encompassed the role of the UN and the EU in the on-going search for a solution.

Mr Droussiotis said after the event that it had been “a very useful and constructive meeting which enabled the UK Cypriot community and Mr Stefanou, a key representative of the Cyprus Government, to develop a dialogue with key UK parliamentarians and to stay in touch with the thinking on Cyprus within British political circles”.

He added: “The British Cypriot community relies upon the valuable support of our parliamentary friends to keep Cyprus on the political agenda in this country; exercises such as this evening’s are vital, enabling us to exchange ideas and thoughts with our political supporters – keeping our approach fresh and informed”.