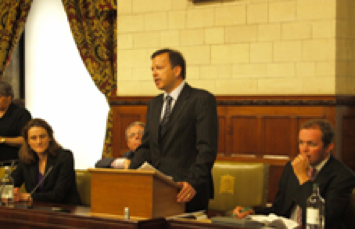 The cause of reuniting the island of Cyprus received fresh support in the UK last night with British parliamentarians responding to the Federation’s calls for Cyprus to be pushed further up the foreign policy agenda of this country.

The annual lobby event in Parliament, held under the auspices of the National Federation of Cypriots in the UK and co-sponsored by a number of MPS and Peers from all three of the main parties, heard contributions from veteran as well as new parliamentary friends of Cyprus.

The meeting was welcomed by its chairman, Peter Droussiotis, President of the National Federation of Cypriots, who started by presiding over a minute’s silence in honour of the lives lost in Monday’s explosion at a naval base in Cyprus.

Mr Droussiotis then welcomed guests, stressing that UK Cypriots would never give up on Cyprus and that their call for Cyprus to be free and reunited for the benefit of all Cypriots would remain the British Cypriot community’s top priority.  He castigated Turkey’s refusal to work sincerely for the island’s reunification and reminded the British Government about its own obligations to Cyprus by virtue of its status as a guarantor of the independence and territory integrity of the island. He then called on the UK to use its leverage with Turkey in order to put pressure on it to work for a fair and lasting settlement on the island.

Mr Droussiotis then emphasised the change of format in this year’s events, where questions and answers from the start would generate a greater interaction between the politicians on stage and Cypriot community representatives. Thus it proved, with answers to a wide array of topics being sought by audience members and addressed by politicians from across the political divide and from both Houses of Parliament.

David Burrowes MP, Chairman of the All Party Parliamentary group on Cyprus, responded to the first round of questions, which included the issues of Turkey’s possible EU accession and the people missing since Turkey’s military invasion of the island in 1974:

“Turkey will have to comply with basic rules and principles of the EU, especially on the matter of the missing people. If it is to be taken seriously, [Turkey] will have to play by the rules.”

“Not only will we [supportive MPs] write to the Prime Minister to insist that a meeting is arranged soon but we will insist that it is made a regular occurrence.”

Sir Alan later went on to state his belief that the discovery of gas and oil in the eastern Mediterranean region would place Cyprus in a more powerful position of leverage. He described the island as “a family member and an ally that cannot be forgotten”, reminding the meeting of the important role that Cyprus played in helping to secure victory in World War II.

Theresa Villiers MP returned to the issue of the missing, telling the meeting that “the UK Government is very supportive of efforts to discover the fate of the missing”, adding that she regularly raises the issue with the Minister of State for Europe and urged other politicians to do the same. Ms Villiers also identified Cypriot access to Turkish airspace and ports as central and basic EU obligations with which Turkey needs to comply in order for its EU accession bid to be taken seriously.

Lord Harris of Haringey questioned the strength of EU accession as leverage alone at present, noting how “French and German reluctance to admit Turkey means that Turks know that membership is a long way off”, advocating that other levers of influence must also be used.

This matter was later highlighted by Jeremy Corbyn MP, who reasoned that “even with strong support for Turkey’s EU admission, it would be 5 to ten years away”, and so pressure ought instead to be applied through NATO, where Turkey’s position is more relevant in the short term.

David Lammy MP pointed to previous crises in Iran and Iraq as a reason for the Cyprus problem “losing its momentum” as a high profile global issue, also indicating that recent crises in Portugal, Greece and Spain makes it even more difficult to bring Turkey into the EU, therefore taking away the leverage of its possible accession.  He added that the UK must “play a pivotal role – as it has elsewhere – and stick its neck out.”

In response to a question on desecration of religious and cultural sites in the occupied area in Cyprus, Andy Love MP said “the evidence is irrefutable because it’s there for all to see”, adding that the best solution would be to bring it to an end by reuniting the island. He later suggested that “we don’t have to wait for a particular set of circumstances to apply pressure for a solution – we can do it now by making our voices heard – starting on Sunday with the rally in central London.”

Mr Love also advocated “using the carrot as well as the stick” with regard to negotiating a settlement linked to Turkey’s EU accession and added his name to other MPs who had said they would press Prime Minister Cameron to meet officially with President Christofias in the near future.

Jim Sheridan MP used his closing remarks to urge the Cypriots and politicians present at the meeting to redouble their efforts: “every time there are questions to the Foreign and Commonwealth Office, we must ask them the questions that will keep Cyprus on the agenda.” Mr Sheridan added that everyone – politicians, British Cypriots, anyone interested in justice – must put their minds to how we increase the pressure for action to be taken.

David Crausby MP spoke of his experience of Cyprus as a former member of the House of Commons’ Defence Select Committee and of how he had experienced “furious reactions” from Turkish politicians when he had confronted them about the Cyprus problem. He added his belief that the key to a solution was via Turkey’s EU accession.

Jim Dobbin MP, attending the annual lobby event for the first time, also spoke of his previous experiences with Turkey on a political basis, in his case as a member of the European Scrutiny Committee. He said that although he advocated using EU membership as leverage, “the Council of Europe has 47 members and Turkey is one of them, and can be another forum in which to apply pressure.” A recent appointee to the Council of Europe, Mr Dobbin assured the meeting that he would explore how such pressure might be applied.

Another new face to the Cyprus lobby event was Caroline Nokes MP who, prompted by two local Cypriot Councillors in her Romsey & Southampton North seat, had attended to learn more about the Cyprus problem on behalf of concerned constituents. Mr Droussiotis welcomed her presence:

“Politicians such as Caroline Nokes who have an interest in learning about the Cyprus problem are most welcome to join our events. I am delighted that we are generating fresh interest within Parliament following last year’s election when many of our elected friends retired from the House.”

At the very other end of the scale of familiarity was Tom Cox, former MP for Tooting and decades-long stalwart of the Cyprus cause, who made a characteristically impassioned speech on the importance of fighting on for justice in Cyprus.

Attendees from the Cypriot community in the UK included the President of the Greek Cypriot Brotherhood, Tony Yerolemou, Federation Vice Presidents Andreas Papaevripides, Christodoulos Stylianou, Michael Kashis. Federation Secretary Bambos Charalambous, Executive Members Michael Ellinas and Susie Constantinides as well as many representatives of UK Cypriot community organisations. The event was also attended by the Cyprus Deputy High Commissioner in London and the Consul General of the Republic of Cyprus in the UK.