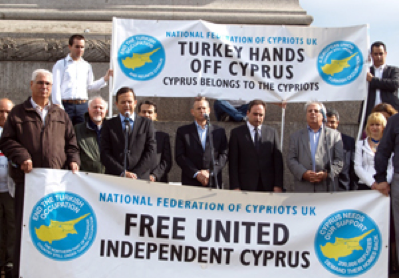 British Cypriots and politicians from across Britain’s political spectrum battled the elements in great numbers yesterday, in a show of solidarity against Turkey’s intransigence over efforts to end its continuing illegal military occupation of the northern part of Cyprus.

The National Federation of UK Cypriots’ annual demonstration at the Turkish Embassy, march through central London and rally at Trafalgar Square saw thousands of protestors make their voices heard, often through torrential rain, to deliver a clear message to the Conservative-led Coalition Government.

A petition was delivered to Prime Minister David Cameron, in which the National Federation of UK Cypriots’ President, Mr Peter Droussiotis, called upon Mr Cameron “to assume your own responsibilities, as the United Kingdom’s Prime Minister, and to use your personal and your Government’s leverage and influence to exert the requisite pressure on Turkey” to withdraw its occupying troops and to play an active and positive role in current efforts to reunite Cyprus for the benefit of all Cypriots. A letter of protest to the Turkish Ambassador to the UK was also delivered following a demonstration outside the Turkish Embassy in London.

The annual London “Rally for Cyprus” was organised by the National Federation of Cypriots in the UK, to mark the 37th twin anniversaries of the fascist coup by the military junta then ruling Greece on 15h July 1974, and the illegal invasion of Cyprus by the Turkish army that followed 5 days later, on 20th July 1974.

The rally in Trafalgar Square was addressed by several British politicians from the main parties. Mr Peter Droussiotis, President of the National Federation of Cypriots in the UK, and The Government Spokesman of the Republic of Cyprus, Mr Stefanos Stefanou, also addressed the event.

After presiding over a minute’s silence for the tragic victims of the explosion at a Cypriot naval base last week, Mr. Droussiotis articulated the Rally’s main demands and spoke of the British Cypriot community’s frustration at “successive British Governments paying lip service to delivering justice in Cyprus, while doing little, if anything, of substance to put real pressure on Turkey to change course.”

He added: “We call upon David Cameron to use his authority as Prime Minister to prevent the Cyprus problem from being relegated to the sidelines, from being constantly downgraded by the establishment of the British Foreign Office.”

Charles Tannock, a Member of the European Parliament for London, told the rally that he and his fellow London MEP Marina Yannakoudakis, had recently gained the signatures of over 400 MEPs – a clear majority of the entire House, calling for more pressure on the Turkish government to help to resolve the matter of the Cypriots who have been missing since the invasion of 1974.

Matthew Offord MP recounted his experience of seeing with his own eyes desecrated religious and cultural sites in the occupied areas and assured the community of his and his colleagues’ strong commitment to a free and reunited Cyprus.

Jim Sheridan, a Scottish MP,  who attended despite intense preparation in relation to his role as a member of the House of Commons Select Committee that will take evidence from Rebekah Brooks, and Rupert and James Murdoch on Tuesday, stated that the Turks “should leave, and leave immediately”. He also promised to highlight the Cyprus issue to the Scottish people and commented on the presence of so many young Cypriots at the rally, saying how it showed that “young vibrant people are here today to keep the cause of Cyprus going.”

Mr Charalambos Pittas, the Mayor of occupied Morphou, spoke on behalf of the nine occupied municipalities in Cyprus. He paid tribute to the support of British politicians in their efforts to help expedite a solution in Cyprus and spoke of the pleasure he will have in welcoming them to a free Cyprus one day. Appreciation of the work of British Cypriots was also echoed by Mr Christakis Paschalis, President of the Pancyprian Union of Refugees, who emphasised the need to support Cyprus President Christofias’s strenuous efforts to secure a Cypriot-owned just a and lasting settlement. Mr Pittas and Mr Paschalis were accompanied by Mr Savvas Savvides, Mayor of occupied Akanthou, and Mr Andreas Meraklis, P.E.P. Secretary, respectively.

Cypriot MEP, Atigoni Papadopoulou, referred to her work on behalf of Cyprus within the European Parliament and pointed out that there can be no solution to the Cyprus problem without the removal of the Turkish army and the Turkish settlers and the return of refugees to their towns and villages.

Sir Alan Meale MP said that the British Government must “eventually wake up to the reality that the principles that Britain stands for elsewhere must be applied in Cyprus.” He added:

“It is about time that a British Government said: ‘this is not good enough for us – our international foreign policy cannot support anything like this’. And we will campaign for this for as long as it takes.”

The keynote speaker at the event was Mr Stefanos Stefanou, the Government Spokesman for the Republic of Cyprus, who reiterated his Government’s determination to achieve an agreed solution in Cyprus which “will terminate the occupation, reunify our land and restore the human rights and fundamental freedoms of the whole of the people [of the island].”

Mr Stefanou pointed out that efforts for a solution have stumbled on the intransigence and negative attitude  of Turkey noting that the Turkish side’s stance on core issues does not leave room for further progress.

”Our efforts for a solution must be based on principles and at the same time be realistic,” he said, adding that the aim is to agree on a bi-zonal, bi-communal federation, which the Greek Cypriot side is dedicated to.”

He also mentioned the recent meeting in Geneva between the UN Secretary-General and the leaders of the two communities in Cyprus, at which the UN chief suggested the intensification of the talks, and pointed out  that  Cyprus President Demetris Christofias is willing to engaged in intensive talks in a constructive manner.

Mr Stefanou also referred to the recent deadly explosion of munitions at the ‘Evangelos Florakis’ Naval Base on the island, expressing deep sorrow and noting that responsibilities must be assumed and that ”amidst the mourning and pain, we all need to find the strength to work together to address the problems, and we shall.’

Mr Droussiotis closed the rally by pointing out that this was the fifth year in succession that he had the privilege as well as the sadness to preside over the Cyprus Rally proceedings in Trafalgar Square.  He said that he wanted to use that milestone to emphasise the Federation’s unity of purpose and proceeded to pay tribute to all of his long-serving colleagues on the Federation’s Executive whom he named individually: Vice-Presidents Andreas Papaevripides, Christodoulos Stylianou and Michael Kashis, Chair of the Rally Organising Committee, Susie Constantinides, General-Secretary Bambos Charalambous, Treasurer Ninos Koumettou, members Michael Ellinas, George Adonis and Neophytos Nicolaou and veteran Executive Secretary Andreas Karaolis. He also thanked the British Parliamentarians present for their support, stressing that the leadership of the Federation and UK Cypriots drew strength from their solidarity to continue the struggle for a free and united Cyprus.

During the march Cypriot women from the Federation’ various organisations, dressed in black to symbolise Cyprus’s continuing tragedy, laid a wreath made out of each letter in Cyprus’s name at the Cenotaph war memorial in Whitehall.

You may watch the video of the picketing, march and rally by clicking on the Play button below: