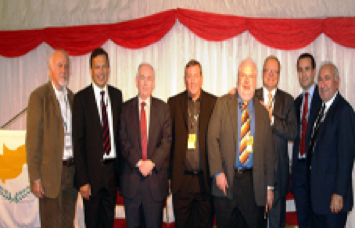 The Shadow Minister for Europe, Wayne David MP, last night reiterated the Labour Party’s commitment to a re-united, bi-zonal, bi-communal, federal, Cyprus, pledging that his party was “full square” behind the Republic of Cyprus’s struggle for reunification of the island.
At an event organised jointly by the Labour Cypriot Society, the Greek Cypriot Brotherhood, AKEL in Britain and EDEK UK, under the auspices of the National Federation of Cypriots in the UK, at Labour’s annual party conference in Liverpool, Mr David told guests:

” I reaffirm the Labour Party’s full-square commitment to the reunification of the island, in a solution achieved by Cypriots themselves. The challenge for all politicians is to bring about the unity of the island that its indigenous people desire.

“Meaningful discussions have taken place and it is incumbent upon us to see that the negotiating environment is right. We will do everything that we can, as a Labour Party, to see that the unity is made real before too long.”

The reception’s guests were welcomed by Mr Peter Droussiotis, President of the National Federation of Cypriots in the UK, and Chair of the Labour Cypriot Society, who referred to Turkey’s bullying tactics in the region, most recently demonstrated in its response to Cyprus’s exploratory drilling for gas in its exclusive economic zone. Pointing out that Greek Cypriots are not alone in their view of Turkey’s ‘pernicious role in relation to Cyprus’ Mr Droussiotis cited how Turkish Cypriots have this year “taken to the streets in mass rallies demanding that Turkey leave the island and calling for Cyprus to be reunited”.

Mr Droussiotis added that Turkey’s disingenuous approach to Cyprus had been revealed by its response to the demonstrations, saying:

“Prime Minister Erdogan’s scathing response that the demonstrators should not dare speak out against the country that feeds them and that ‘he’ has strategic interests on the island, really let the cat out of the bag.

Turkey’s latest threats against not only Cyprus but also Greece and more recently Israel too vividly illustrate Turkey’s aggressive stance in the region and demonstrate that this country is not the benign regional power that it is often portrayed to be in the UK.”