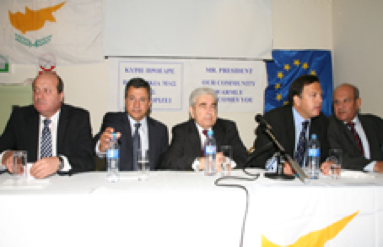 British Cypriots yesterday welcomed the President of the Republic of Cyprus, Mr Demetris Christofias, to London, applauding his continued efforts to reunite Cyprus, his commitment to stand up to Turkey’s negative tactics over reunification and his pledge to stand his ground on the question of Cyprus’s natural resources.

At the public event organised by the National Federation of Cypriots in the UK, Mr Christofias was warmly received by huge numbers of British Cypriots, filling the venue at the Cypriot Community Centre in Haringey, London, to the brim. He was introduced by the Federation’s President, Peter Droussiotis, who praised the President’s tenacity in pursuing justice for Cyprus and pledged the unwavering support of UK Cypriots to the Cypriot people’s struggle for a free, united island.

“The Cypriot community in the United Kingdom will never bow to Turkey’s unacceptable threats. UK Cypriots, united in support of the Federation’ efforts, will remain at the forefront of the struggle for a just and lasting solution that will bring to an end Turkey’s occupation and colonisation of northern Cyprus, and will secure the human rights and fundamental freedoms of all Cypriots, irrespective of ethnic origin or religion, throughout the territory of the island.”

The President of the Federation noted the critical importance of current developments in relation to the island and called on all Cypriots, both on the island and overseas, to work together, with determination, so as to protect and advance the legitimate interests and legal rights of the Republic of Cyprus in the face of Turkey’s persistent provocations.

Mr Droussiotis also highlighted the plight of the Turkish Cypriot community in the occupied northern part of the island, by stressing that their very survival is at risk, because of the continuing military occupation and colonisation by Turkey, and called on Greek Cypriots to extend a hand of friendship and co-operation to Turkish Cypriots who are fighting to free themselves from the Turkish army’s grip and to preserve their  identity on the island.

At the beginning and end of his speech, President Christofias received a standing ovation and prolonged and enthusiastic applause from the audience. In addressing the issue of natural resources in the waters surrounding Cyprus, he announced that exploratory drilling is to proceed in the coming days, to ascertain what hydrocarbon reserves may exist. He went on to state that Turkey has no right to either protest or threaten Cyprus nor to cause tension, bearing in mind that the exploration is to take place within the Republic’s Exclusive Economic Zone in accordance with international law. President Christofias called on Ankara to work for a political settlement in Cyprus, pointing out that several important countries, including the United States and Russia, as well as the European Commission, have acknowledged Cyprus’s sovereign right to explore and use its natural resources.

“We have decided to continue to work exercising our self-evident sovereign rights, including the exploitation of our natural resources, always on the basis of international law”, he explained.

The President condemned Turkey’s tactics of blackmail over an independent state, member of the EU and the UN, calling once again for the Cyprus problem “which Ankara has created and maintains unresolved”  to be  settled.

President Christofias stressed that the interests of both Turkey and the Turkish Cypriot community would be best served with a solution of the Cyprus issue and that all Cypriots would benefit from the revenue derived  from the island’s natural resources.

“The island’s natural resources and their potential exploitation falls within the remit of the federal government, which in turn splits revenue through its budget to the two federal units,” he explained.

“We call on Turkey to realize, at long last, that the solution to the Cyprus problem is truly in its own interests and to work in the direction of finding such a solution, instead of causing tension in the area,” he said.

Joining British Cypriots at the event were Mayors of Haringey and Barnet, Councillors Gina Adamou and Lisa Rutter, respectively, both of Cypriot origin, GLA Member for Barnet & Camden,  Cllr Brian Coleman, GLA Member for Haringey and Enfield, Cllr Joanne McCartney and numerous other UK Cypriot Councillors. Bishop Athanasios of Tropaiou represented the Archbishop of Thyateira and Great Britain while present at the event were the Cyprus High Commissioner and top diplomats of the Cypriot and Greek delegations in the UK. The President was accompanied, in addition to his wife, Elsie, by Cyprus’s Minister of Foreign Affairs, Mrs Erato Kozakou-Markoulli and the Cyprus Government Spokesman, Mr Stefanos Stefanou.

The President of Cyprus was flanked on the podium by the Federation President, the Federation’s Vice-Presidents Christodoulos Stylianou and Andreas Papaevripides, AKEL in Britain Secretary and DESY UK President respectively, and Michael Ellinas, Federation Executive Member and President of DIKO UK, illustrating the unity of the Federation across political and party lines.

Following the public event, a dinner was held in honour of the Cyprus President and his wife Elsie by the Secretariat of the Federation.