Conservative politicians rally around the Cyprus cause 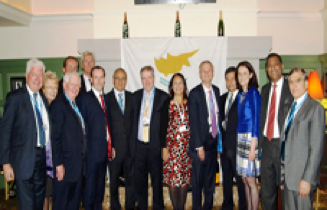 British Cypriots at the Conservative Party‘s annual conference in Manchester were last night assured of the Coalition Government’s commitment to the delivery of a comprehensive settlement to the Cyprus problem and of Conservative support for the Republic of Cyprus in its pursuit of realising the potential of natural resources in its jurisdiction.
The well-attended fringe event was organised by the Conservatives for Cyprus and National Federation of Cypriots member organisations, the Democratic Rally DISY UK (the Conservative Party’s Cypriot sister party) and the Greek Cypriot Brotherhood. The Minister for Europe , David Lidington MP, underlined the Government’s support for current efforts to reach a negotiated settlement on the island. The reception, co-hosted by the Chairman of the Conservative for Cyprus group, Mr Tony Yerolemou, Theresa Villiers MP and Charles Tannock MEP, enjoyed strong support from MPs, MEPs and local politicians, as well as party delegates attending the party’s conference.

Mr Lidington told the audience of his visit to the island earlier in the year, saying that he returned from the trip “very conscious of how the UK must assist in what must be a negotiated settlement between the two communities on the island”. He stated his support for the ongoing struggle to identify missing persons from the invasion of 1974 and of his admiration of the efforts to try to “bring about an understanding between the different communities on the island,” and of the “erosion of the Turkish Cypriot identity” in the light of Turkish mainland settlement on the island.

The Minister wished Cyprus good fortunes in recovering from the explosion in July at the naval base on the island before re-stating his hope that a bi-communal, federal solution could be reached through ongoing negotiation, saying that “we will continue to do what lies within our power to give support to courageous leaders, who will have to take risks in the search for compromise.”

Earlier, Charles Tannock MEP had welcomed guests, telling them of his pleasant surprise at how he and Marina Yannakoudakis MEP had gained the signatures of more than 380 MEPs on a written declaration on the subject of missing persons, representing a majority of that chamber, saying that it shows the support that Cyprus still enjoys within the EU. He also spoke of the recent explorative sorties by Cypriot maritime crews seeking to ascertain the reserves of natural resources, describing Turkey ’s reaction as “bullying and unnecessary pressure” within the Republic’s Exclusive Economic Zone. He added that “ Turkey has no right to say that this drilling should stop” and that he was “absolutely sure that if the Government of Cyprus can monetise the gas, it will distribute the money between and across both communities”.

The fringe reception, co-hosted by the Minister for Transport Theresa Villiers MP (Chipping Barnet) and London MEP Charles Tannock, was also addressed by Marina Yannakoudakis MEP, herself a UK Cypriot. Ms Yannakoudakis spoke of her own work on the high level contact group of the European Parliament looking at its relationship with Turkish Cypriots, ensuring that the island’s infrastructure is ready for reunification. She added that “the two communities should be one and I hope that soon we will have a solution to the Cyprus problem.”

The National Federation of Cypriots in the UK  was represented at the event by Vice-President Mr Andreas Papaevripides, who is also the Chairman of DISY UK. Mr Papaevripides expressed the gratitude of UK Cypriots for the support of Conservative politicians and members over many years.

On the matter of drilling for potential hydrocarbon reserves, he expounded the rights of Cyprus to continue the search for natural resources and his hope that they would help to expedite a solution to the division of the island, as well as benefiting the European Union via security of energy supply. He added:

“I cannot understand the Turkish argument that the drilling should stop as it will hinder the process of negotiations over a solution in Cyprus – if there is one thing that is responsible for the failure to reach a solution it is Turkey itself that has played that role for years. Turkey is trying to present a new image within the Arab world but people do not forget their historical record in places like Libya , where they were strong allies of Colonel Gaddafi.”

Theresa Villiers MP, the Coalition’s Minister for Transport, stated her belief that the benefits for all communities on the island should drive a solution in Cyprus . She thanked all of the guests for showing their support for Cyprus . She added that:

“The geo-politics of Cyprus and Israel may be changing with the discovery of significant fossil fuel deposits in the region and I believe that such a discovery can be very positive for Europe’s energy security and potentially very positive for the Cyprus economy. It is therefore vitally important that the drilling goes ahead and that we can use it as the financial underpinning of a just and lasting solution for the island.”