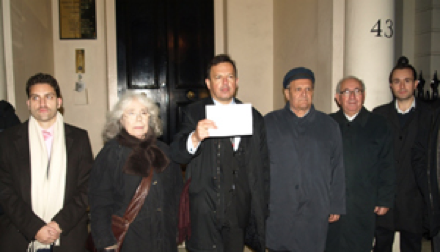 British Cypriots made demands of the Turkish Government last night at a demonstration in central London. Protesting on the 28th anniversary of the unilateral declaration of independence by Turkey’s puppet regime in the areas of northern Cyprus illegally occupied by the Turkish army, generations of community members called time on the illegitimate and universally unrecognised administration which has been declared ‘legally invalid’ by the United Nations.

Organised by the National Federation of Cypriots in the United Kingdom, the demonstration, which has been held every year since November 1983, attracted UK Cypriots and friends of Cyprus from across Britain. Representatives from many of the Federation’s member associations and of Cypriot students in the UK showed their resolve against the illegal occupation and the self-proclaimed pseudo-state, which remains unrecognised by all countries in the world except Turkey.

A letter of protest was posted under the door of the Turkish Embassy addressed to the Turkish ambassador to the UK in which the Federation demanded the withdrawal of the Turkish occupying army and he Turkish colonists illegally transferred by Turkey to the north of Cyprus and called on the Turkish government to abide by the resolutions of the UN Security Council and international law.

The British Prime Minister David Cameron was also petitioned in a separate letter in which the leadership of the UK Cypriot community called on the United Kingdom to honour its treaty obligations to Cyprus and apply real pressure on Turkey to work with sincerity towards a just and comprehensive settlement for the benefit of all Cypriots.

“The illegal regime in the territory of Cyprus occupied by the Turkish army is entirely dependent upon and subordinate to Turkey. In no way is the existence of this pseudo-state conducive to a solution and the reunification of the island in the interest of all Cypriots. On the contrary, it bears testament to Turkey’s bloody-minded, destructive and divisive stance towards Cyprus, in the face of the goodwill demonstrated by successive Presidents and governments of the Republic of Cyprus.

“The latter’s readiness to accept a bi-zonal, bi-communal federal solution is indicative of the constructive compromise which the Greek Cypriot political leadership on the island has been willing to make in the interest of a lasting and comprehensive settlement. But this has to be negotiated on the basis of a state with a single sovereignty, one international personality and a single citizenship within a framework which safeguards the founding principles of the European Union, democratic values and the human rights and fundamental freedoms of all Cypriots in their own country.

“The UK is a Guarantor Power of Cyprus’s independence and territorial integrity and has many vested interests on the island, not least with regard to security and the sovereign military bases it maintains there. It is high time that world leaders such as Prime Minister David Cameron hold Turkey to account by demanding a just and viable resolution in Cyprus.

“Turkey’s gunboat diplomacy – literally, gunboats were sent to threaten the Republic’s entirely legitimate exploratory operations for gas within the island’s Exclusive Economic Zone  – shows that Turkey is not suitable at present to sit at the EU table. European leaders are starting to realise this and at last Turkey’s veil is starting to slip.

“This abhorrent situation cannot be allowed to continue and British Cypriots are making and will continue to make their voices heard until justice is done.”