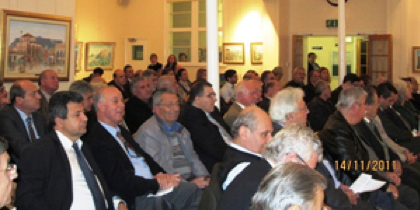 The National Federation of Cypriots in the United Kingdom last night held its biennial elections for its 30 member Secretariat and the 5 senior officers of the organisation at an extremely well attended general meeting.

The event was also attended and addressed, on behalf of the Cyprus High Commission in the UK, by the Consul-General of the Republic of Cyprus Mr. George Georgiou.

The elections returned a familiar set of faces to key roles, as the organisation continues its programme of gradual renewal, while maintaining its political and community focus.

The President of the National Federation, Peter Droussiotis, briefed over 100 members present from the various Federation associations about the main activities of the Federation since the last meeting and presented the plan for the new year. The Treasurer, Ninos Koumettou, presented the organisation’s accounts for the two year period.

Following the election of an independent electoral committee, the elections to the Secretariat were held with 30 new members being elected out of 41 candidates who stood for election. The names of the newly elected members of the Secretariat are shown below at the end of this news release.

After the election of the 30 members of the Secretariat, the Federation’s five senior officers were elected.

Peter Droussiotis was returned unopposed unanimously to a third term as President.

Michael Ellinas joined Andreas Papaevripides and Christodoulos Stylianou when all three were elected to the three positions of Vice President of the Federation.

Christos Karaolis, currently President of Nepomak, the world organisation for young overseas Cypriots, was elected on to the position of General Secretary of the Federation without a contest, while Ninos Koumettou was also returned unopposed as Treasurer.

Mr Droussiotis expressed his gratitude to members for his re-election, praising the collective efforts of the entire team for their work through a two-year term that included significant political challenges both in the UK and in Cyprus:

“The ongoing talks between the two communities in Cyprus remain incredibly fragile. Sadly, notwithstanding President Christofias’s sincere efforts, there is currently no sign that the direct negotiations will lead to a breakthrough. If anything, the Turkish side’s positions have hardened, while Turkey has become more bellicose than ever, issuing regular threats against Cyprus and its exploration for gas, within the island’s Exclusive Economic Zone, which is its sovereign right.

“Since the UK elections last year, we have faced up to the challenge of keeping Cyprus high on the agenda with a new Government and many new faces in Parliament. With the support and active involvement of my fellow officers, the Executive and the Secretariat, we have been able to overcome many of the political hurdles placed in our way and to develop new political relationships utilising our respective networks.

“Our efforts to consolidate and enlarge our core base of cross-party parliamentary support will continue, as will our initiatives to renew the Federation and improve its political impact.  Together with our friends in Nepomak, we have laid the foundations, so that we can, incrementally, implement a strategy of renewal within our organisation.

“We are cementing the Federation’s position as the acknowledged voice of the British Cypriot community and as a key point of reference and authority on Cyprus in political and media circles in the UK.

“In our Vice-Presidents Andreas, Christodoulos and Michael, our General Secretary, Christos Karaolis, and our Treasurer, Ninos Koumettou, we have a very capable team and I look forward to getting back to business with all of them.”

At the end of the meeting, the Secretariat was authorised to forward a resolution in support of the efforts of Cyprus President Demetris Christofias to reunite Cyprus.

The duly elected members of the Secretariat are:

*Participates as President of the Greek Orthodox Communities in the UK