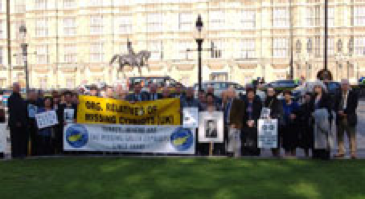 Parliamentarians from across the political spectrum reiterated their support for a reunited Cyprus and their solidarity with the island as it assumes the Presidency of the European Union Council.

At a packed meeting held in the House of Commons on Tuesday night representatives of the British Cypriot community joined a large number of British parliamentarians to mark the 38th anniversary of Turkey’s invasion of Cyprus and, at the same time, to celebrate the assumption by the Republic of the Presidency of the Council of the European Union.

The lobby event which has been held annually in July ever since the island’s invasion attracted healthy cross-party support and was followed by a reception to celebrate the six-month Presidency and the opportunities that it brings for the island which remains divided after 38 years of occupation by the Turkish army.

Parliamentarians were unanimous as well as vocal in their support of Cyprus’s Presidency and of its significance in placing the island at the centre of the European agenda.

Welcoming those present in Parliament’s Grand Committee Room, Peter Droussiotis, Federation President, said that Cyprus’s EU Presidency came at a crucial time for Europe and the Eurozone and expressed confidence that the Republic would perform its leadership role successfully and effectively.

Mr Droussiotis stressed that Turkey’s continued violation of the island’s independence and territorial integrity must no longer be tolerated by the international community and called on Prime Minister David Cameron to make Cyprus’s reunification a priority of his government and apply real pressure on Turkey to change its intransigence, reminding those present of the UK’s historic treaty obligations to the island. He said, amongst other things:

“ Nearly 40 years later, the injustice perpetrated against Cyprus remains, as pervasive and as insidious as ever. The endless human tragedy of the missing, of the refugees, of the enclaved, all of whom we remember today. The outrage of Turkey’s apartheid on an island, united throughout its long history, now ethnically cleansed, colonised, and forcibly split into two.

“How can these criminal acts be squared with Turkey’s international obligations and its undertakings to the European Union which it seeks to join?

“The Cypriot people want their country back. They want to live together as free people and in peace in their own country, a right denied to them by Turkey, which wants to control the island.

“This is not a zero sum game: the benefits of reunification will be many and varied, naturally, for the Cypriots themselves, but also for Europe and other regional stakeholders, including, of course, Turkey herself.”

The event, which was sponsored by numerous MPs and peers, heard contributions from many parliamentary friends of Cyprus. Sir Roger Gale MP (North Thanet) opened the contributions lamenting the ongoing suffering of the relatives of people who went missing during the invasion of 1974 and whose fate is still unknown. A demonstration by families of the missing outside Parliament prior to the evening’s events had, he said, reminded him of the tragedy of the missing, calling for action to “allow closure and instil some sense of peace, to replace the deep feeling of injustice,” while going on to condemn a situation whereby a “an affluent European country should occupy part of the land of a member state of the EU – one, indeed that now holds the Presidency of the Union.”

Michael Connarty MP (Linlithgow and East Falkirk), spoke of his visit to Cyprus earlier this year as a member of Parliament’s European Scrutiny Committee, and of an island “riven by the division” but with a sense of excitement at the opportunity provided by the EU Presidency to make a statement of its commitment as an EU member. On the matter of the natural resources, he condemned Turkey’s claims over gas reserves and assured the meeting that Cyprus would receive the support it needs  “economically, financially, practically and politically” from its allies.

The Member of Parliament for Finchley & Golders Green, Mike Freer MP noted that a debate in the House of Commons the previous week had been purportedly about relations between the UK and Turkey but, tellingly, focused more on Turkey’s relations with other countries such as Cyprus, Armenia and other states in the region. In relation to the EU, Mr Freer said: “it was discussed that Turkey may have aspirations to join the EU but that can never happen while it occupies a member state and fails to recognise the rules and protocols of the EU”.

The Presidency of the EU represents “an opportunity for Cypriot politicians to put the case for Cyprus on the agenda”, said Jim Dobbin MP (Heywood and Middleton). As a member of the Council of Europe, Mr Dobbin stated his commitment to use his position to draw attention to the Cypriot cause. He also thanked former MP and guest at the event, Eddie O’Hara, for his years of support for Cyprus.

Turkey’s failure to engage and constructively contribute to negotiations for reunification of Cyprus was criticised by Matthew Offord MP (Hendon). He said “The stubbornness of the Turkish government on this and other issues… has hardened my stance on Turkey, and I feel that Cyprus is the line in the sand, and must be resolved if Turkey is ever to join the EU.”

Longstanding friend of Cyprus, Mr Jim Sheridan MP (Paisley and Renfrewshire North), described looking at Famagusta from afar while in a boat months ago, and being unable to imagine the feeling of being isolated and exiled from one’s home. He then contrasted the state of graveyards he had seen on both sides of the divide on the island. In the occupied area, he had seen “people trying to find relatives’ graves, devastated by their desecration, alongside churches full of straw, being used as barns. The contrast to Turkish Cypriot graveyards in the south was amazing; care and attention was clearly paid and CCTV even hused to ensure protection.”

Mr Sheridan reported that he has been appointed as rapporteur to the Council of Europe on the issue of missing people, not just Cypriots but across the geographic area of the Council, and of his commitment to put his efforts into trying to reveal the fate of the Cypriot missing.

Andy Love MP (Edmonton) congratulated the Republic of Cyprus on the EU Presidency, saying that it puts Cyprus “very much on the agenda of Europe. It should remind us that the EU guarantees the human rights of all its members but that at present it does not fulfil that guarantee for many people in Cyprus. Through the acquis communautaire, the EU recognises the freedoms of movement, settlement and freedom of property – freedoms we take for granted in the UK – but don’t exist in Cyprus.”

The Liberal Democrat spokesman on Europe in the House of Lords, Lord Dykes, paid tribute to the efforts of the National Federation of Cypriots, over decades, in promoting the Cyprus cause in the UK and drawing attention to the continuing injustices on the island. Speaking of the Republic’s term as President of the EU, he added “I don’t want just the large nations – France, Germany, Britain – to be in charge of resolving economic or political crises; I want the smaller nations to be involved, as they are just as important.”

The primary parliamentary sponsor of the lobby event, Sir Alan Meale MP (Mansfield), shared his personal disappointment at the role of his party in failing to respond to the invasion of Cyprus in 1974 but equally of his commitment to keep fighting for the cause. He announced that he and fellow parliamentarians were launching their own independent investigation into the missing people. He also announced that film-maker Charles Thompson, whose award-winning documentary on the tragedies in Cyprus [Secret History: Dead or Alive] had brought the issue to the attention of many Britons 18 years ago, will be revisiting the subjects of his documentary and releasing an updated version.

Cyprus, Sir Alan, said, “must grow its way and build its way out of the economic difficulties that it has. It can do that with its allies within its European family. And the EU – which has always needed members like Cyprus – now needs Cyprus more than ever, with its considerable reserves of natural resources. Cyprus’s recovery is important to the whole of the EU and your friends here in Parliament will never let our government forget it.”

The Chairman of the All Party Parliamentary Group on Cyprus, Mr David Burrowes MP (Enfield Southgate), told the meeting that Cyprus has, quite rightly, assumed the Presidency of the EU, and said:  “I find it extraordinary and intolerable that Ministers from across the EU will gather to meet in a divided capital within the EU. Every Minister must question why that is happening.”

“Turkey is very much part of the problem. Turkey must be made to accept Cyprus’s rotating EU presidency and to recognise international agreements. Turkey must abide by European Court decisions.”

Of all the friends of Cyprus to show solidarity with the island’s plight at the meeting, Sir Gerald Kaufman MP (Manchester Gorton) is without doubt the longest-standing ally. He told of his first visit to Cyprus as a journalist in 1961 and the long association with the island and its people ever since. An MP since 1974, Sir Gerald recalled Britain’s mishandling of the invasion of Cyprus in 1974 and how successive British governments had allowed Turkey to flout human rights and international law.

He reiterated his absolute determination to see a resolution: “We must not rest. There are some international situations that have gone on for too long. I raised these when I led a delegation to the United Nations a while ago… I said that I will not leave the House of Commons until the issue of Turkey’s illegal occupation of Cyprus is solved. Even though some time has since gone by, I retain that commitment. I am committed to the territorial integrity of Cyprus. The ruination of Cyprus while complacent countries watched on, is something we can not forget.”

The guest of honour at the reception which followed the lobby event, Theresa Villiers MP (Chipping Barnet), Minister of State for Transport, then addressed the audience, expressing her belief that all Cypriots would gain from a resolution in Cyprus and then stressing the importance of the EU Presidency for Cyprus. Ms Villiers ended the addresses from Parliamentarian guests, saying:

The strong level of attendance by parliamentarians at the meeting was such that not all MPs had the chance to address the meeting but their presence was a demonstration of their support for Cyprus.