Rally for a Free, United Cyprus – Demand Turkey’s compliance with its UN and EU obligations 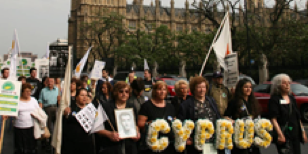 The President of the National Federation of Cypriots in the United Kingdom, Peter Droussiotis, is this week calling on UK Cypriots, friends of Cyprus and all who support justice and the sanctity of human rights, to voice a collective call for a free, united Cyprus.

Mr Droussiotis is urging British Cypriots and friends of the island to make clear to Prime Minister David Cameron the strength of opposition to Turkey’s continuing military occupation of Cyprus’s northern part, by joining a picket, march and rally in London on Sunday 8h July 2012.

The Federation’s annual rally marks Turkey’s military invasion of Cyprus in July 1974, and is the biggest gathering of UK Cypriots and friends of Cyprus, who come together in protest against the tragic and scandalous division which still plagues the island 38 years after the Turkish army invaded and occupied its northern territory.

“As Cyprus assumes the Presidency of the European Union, it is more important than ever for British Cypriots and our friends in the UK to demonstrate our support for a free and united Cyprus, within that Union. This year we celebrate Cyprus’s achievement in taking over the leadership of the Council of the European Union but we do so fully conscious of the fact that Cyprus remains in the shadow of Turkey’s military occupation. And we call upon our Parliamentary friends, the UK Government and the European Union to press Turkey hard so that it ends its aggression against the island and its unacceptable policy of partition.

“Her Majesty’s Government must be made aware that we will not give up on Cyprus – the United Kingdom has particular treaty obligations to Cyprus, as a Guarantor Power of the island’s independence and territorial integrity, to use its influence over Turkey to ensure that the latter works genuinely for a just and lasting settlement based on EU values and principles. In this, the year of the Diamond Jubilee, the UK must demonstrate its solidarity to Cyprus, its Commonwealth and EU partner and ally, as the world unites in London for the Olympic Games, a symbol of world cooperation.”

Sunday’s actions will begin at 2.45pm with a demonstration outside the Turkish Embassy in Belgrave Square, followed by a march through central London, via Piccadilly Circus, to Trafalgar Square for a rally at 4.15pm. A Federation delegation will hand in a petition to the British Prime Minster at 10 Downing Street immediately before the rally and a letter of protest will be delivered to Turkish Ambassador before the start of the march.

The main speaker at the event will be Mrs Eleni Mavrou, Cyprus Home Affairs Minister. Numerous British Parliamentarians and MEPs will join Mr Droussiotis, as well as representatives of Cypriot refugee organisations and occupied municipalities in Cyprus, on the platform in Trafalgar Square to show their solidarity with the Cyprus cause.