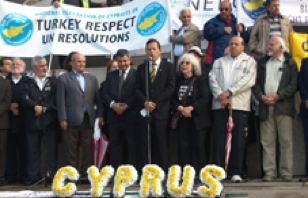 Prime Minister David Cameron was sent a clear and heartfelt message from the British Cypriot community today as thousands of people were joined by politicians from across Britain’s political spectrum in a show of solidarity against Turkey’s continuing illegal military occupation of the northern part of Cyprus.

As has become tradition, the National Federation of UK Cypriots’ well-attended demonstration started outside the Turkish Embassy, formed into a march through central London and culminated into a rally at Trafalgar Square.

The National Federation of UK Cypriots’ President, Mr Peter Droussiotis, led a Federation delegation to  deliver a petition to Downing Street, calling for action from Prime Minister David Cameron to address Turkey’s intransigence on Cyprus. The petition stated “In this, the Queen’s Diamond Jubilee, we ask you to act in the interests of a member of Her Majesty’s Commonwealth. As Cyprus assumes the Presidency of the EU, we ask that your Government shows solidarity and support for a fellow EU member. And as the world descends upon London for a sporting celebration of global cooperation, we ask that you use your influence on the world stage for the benefit of a close and committed historical ally of the United Kingdom.” A letter of protest to the Turkish Ambassador to the UK was also delivered during the protest outside the Turkish Embassy in London.

The rally in Trafalgar Square was addressed by British politicians from the main parties, Mr Droussiotis, Mr Charalambos Pittas, Mayor of occupied Morphou, on behalf of the occupied towns and municipalities of Cyprus, and Mrs Eleni Mavrou, Cyprus Home Affairs Minister, who was the main speaker at the event.

In his introductory speech, Mr Droussiotis articulated the rally’s main demands and said, among other things:

“The Turkish Ambassador to the UK objects to the terms ‘illegal occupation’ and ‘invasion’ which are included in motions supported by our parliamentary friends in the House of Commons. Turkey finds our presence and what we do, in support of Cyprus,  in this country, uncomfortable.  It wants to silence us. So much so, that there have been efforts by various elements to derail this rally on the ludicrous grounds that it constitutes a ‘hate crime’!

“Today, the Cypriot community of the UK stands united, proudly, by the side of the government and people of the Republic of Cyprus, as the island fulfils its important role as President of the European Union – a President of Europe still fighting for justice!”

Charles Tannock, a Member of the European Parliament for London, attending the rally for the 13th consecutive year, pledged his continuing support for the goals of the Republic of Cyprus and asked of Turkey “How can you be a candidate for membership of the European Union when you don’t recognise one of its members and, indeed, the one that holds the Presidency for the next six months?”

Andy Love MP, whose constituency is home to many Cypriots, congratulated Cyprus on its assumption of the EU presidency, saying that it puts Cyprus “where it ought to be – at the heart of Europe.” He went on to stress the importance of the UK’s role, saying that it has “a unique role to play as a Guarantor Power of the independence and territorial integrity of Cyprus, and also as a prominent member of the EU and a Security Council member. And the European Union is the guarantor of human rights of its members.” Mr Love went on to pay tribute to the Cypriot diaspora in the UK, for their efforts, not least relating to keeping the matter of the Cypriots that went missing during the invasion of 1974, and announcing a Parliamentary inquiry into the issue with fellow parliamentarians.

Mr Charalambos Pittas, the Mayor of occupied Morphou, spoke on behalf of the nine occupied municipalities in Cyprus. He said that “The Cypriot people will never give up their ancestral homes to the Turkish invader” and congratulated the UK Cypriot community for its dedication to the cause of a free and united Cyprus.

Former Minister for Europe, Chris Bryant, Labour Member of Parliament for the Welsh constituency of the Rhondda, then spoke. He stated: “It is a disgrace for every politician in Europe that we have a divided capital and a divided island in  the EU… Younger generations must know what has happened in Cyprus. The Turkish government made promises to recognise the Republic of Cyprus, promises to open Turkey’s ports to Cypriot traffic, promises to restore land to the Cypriot refugees and promises on investigating the fate of missing people. None of those promises have been kept. The UK must do everything in its power to make sure that the promises are delivered.”

Veteran Labour politician and former Secretary of State for Health, Frank Dobson MP paid tribute to his constituency predecessor, Lena Jeger, who had campaigned for Cyprus’s independence from Britain. “I never thought that, nearly 40 year later, we would still be campaigning for Cyprus’s freedom from occupation by Turkey… Every single government in the EU should be ashamed that it has not made clear to Turkey that if it wants to be a member of the EU, it has to play by the rules. We cannot have a situation whereby the presidency country of the EU is occupied by an alien force.”

Longstanding Cypriot ally and exponent of the cause of a reunited Cyprus, Sir Alan Meale MP, lamented the failures of successive UK governments, of differing political colours, to act in accordance with the UK’s responsibilities in relation to   Cyprus. “Bringing Cyprus into the EU is not enough. We have to ensure that we bring justice to the relatives of the missing people, and justice to those who have lost their homes. We must tell Turkey to stop interfering in the territory of an EU member and UK ally.” He added that “Turkey are trying to claim ownership of areas with reserves of oil and gas around Cyprus. Turkey: you have no claim to these assets. These areas belong to Cyprus!”

The keynote speaker at the event was Mrs Eleni Mavrou, Home Affairs Minister of the Republic of Cyprus. Mrs Mavrou denounced the systematic colonisation of, and the destruction of the cultural heritage in, occupied Cyprus. She added that the Government of the Republic of Cyprus was willing to lend all efforts to negotiations for a settlement to the division of Cyprus, even during the six-month presidency of the Council of the European Union but made clear that, instead of working in this direction, Turkey is pushing for the island’s partition and the establishment of two separate states in Cyprus. She also thanked British Cypriots for their continued efforts in the struggle to reunite Cyprus.

Mr Droussiotis closed the rally by presiding over a minute’s silence for the missing as well as people whose lives were lost in seeking independence and justice for Cyprus, before calling the Federation’s Executive officers and colleagues to come together with British politicians and other esteemed guests, in a sign of unity, in order to sing the Cyprus national anthem which is an ode to freedom.

The annual “Rally for Cyprus” was organised by the National Federation of Cypriots in the UK, to mark the 38th anniversary of the illegal invasion of Cyprus by the Turkish army in July 1974.