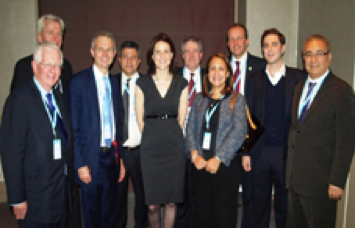 British Cypriots at the Conservative Party‘s annual conference in Birmingham were last night assured of the party’s commitment to the delivery of a comprehensive settlement to the Cyprus problem.

Cabinet-level support was reiterated at a fringe event organised by the group Conservatives for Cyprus, the Democratic Rally (DISY) UK (the Conservative Party’s Cypriot sister party) and the Greek Cypriot Brotherhood, under the auspices of the National Federation of Cypriots in the UK.

“A solution in Cyprus is still a priority for our Government. We support the efforts in place to find a solution to end division, that is, crucially, for all Cypriots, and decided upon and reached by Cypriots, to serve the interest of everyone on the island.

The Minister also praised the “impressive manner in which the Government of the Republic of Cyprus is carrying out the duties of the Presidency of the European Union” and pledged the support and cooperation of the Conservative-led coalition to the government that is formed after next year’s election in Cyprus.

Charles Tannock MEP then addressed the reception, asserting his commitment to continue working on the issue of the missing persons in Cyprus and added his congratulations for Cyprus’s deft Presidency of the EU, adding:

“I’ve also been impressed with the way in which Cyprus has been rather heroic; despite the banking crisis they’ve even been found time and political energy to come up with a contingency plan to handle what might happen if things turn even worse in Syria.

“We must all remain optimistic for a solution based on a bi-zonal, bi-communal federation under one flag which we can welcome back into the community of nations.”

Ms Villiers then called upon the Chairman of the Democratic Rally UK and Vice President of the National Federation of Cypriots, Mr Andreas Papaevripides, to address the function. He welcomed the guests and thanked them for their support.

“This is a party where we have enjoyed solid support. We are here as strong Conservatives and when there are elections we will be there to support our candidates, everywhere.”

Theresa Villiers closed the speeches echoing thanks for the support of attendees. She said:

“We all want to see a just, balanced and lasting solution in Cyprus, and the involvement of the UK Government in facilitating and encouraging a solution is of huge importance to the Cypriot community. I echo the congratulations to the Government of Cyprus for running a good Presidency of the EU.

“It is sad that another year has passed without a settlement but I know that everyone here joins me in supporting progress towards a settlement that embraces the interests of all Cypriots.”