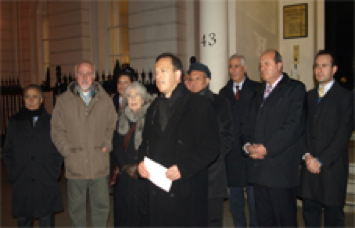 The Turkish Embassy in London last night shut its doors and battened down the hatches in a bid to deny British Cypriots their voice. As usual, the Turkish Ambassador failed to acknowledge the Federation’s delegation and refused to accept its letter of protest which had to be posted under the Embassy’s door.

But a vocal demonstration, organised by the National Federation of Cypriots in the UK, made itself heard as it protested the 29th anniversary of the unilateral declaration of independence by Turkey’s puppet regime in occupied northern Cyprus.

Federation member associations, UK Cypriot youth organisations and Cypriot students in the UK showed their resolve against the illegal occupation and the self-proclaimed pseudo-state, which remains unrecognised by all countries in the world except Turkey.

Peter Droussiotis, President of the Federation, was accompanied by Federation Secretariat and Executive members, as well as UK Cypriot youth representatives, as he tried to deliver a letter to the Turkish Ambassador but the door of the Embassy stayed firmly shut in a discourteous but now typical reflection of Turkey’s refusal to engage on the Cyprus problem. The letter, which was pushed under the door, demanded the withdrawal of the Turkish occupying army and he Turkish colonists illegally transferred by Turkey to the north of Cyprus and called on the Turkish government to abide by the resolutions of the UN Security Council and international law. It also called upon Turkey finally to resolve the human tragedy of the Cypriot people who went missing during its invasion of the island in 1974.

Expanding on the contents of the letter, Mr Droussiotis said:

“Turkey’s bullying behaviour and its regular threats against Cyprus, as well as its disgraceful efforts to derail Cyprus’s presidency of the Council of the European Union, are wholly at odds with a country that claims to want EU membership.

“Turkey gains nothing but much-deserved opprobrium and a diminished international reputation because of its total failure to meet its international obligations in relation to Cyprus.

“The world will not and cannot tolerate Turkey’s injustices in Cyprus indefinitely. The puppet regime in the occupied area is testament to Turkey’s aggression against little Cyprus and will forever be a blot on that country’s human rights record.”