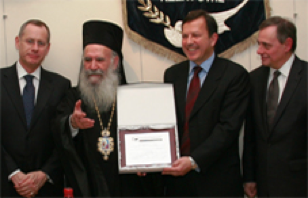 The National Federation of Cypriots in the UK, honoured today the life, devotion to duty and religious, charitable and social endeavours of His Eminence Archbishop Gregorios of Thyateira and Great Britain at a formal dinner hosted by the Federation at its headquarters in North London , prompting tributes to the cleric who has served for 25 years as the head of the Greek Orthodox Christian Church in the United Kingdom and Ireland.

The Greek Ambassador, HE Mr. Konstantinos Bikas, and Cyprus High Commissioner, HE Mr. Alexandros Zenon, also honoured the dinner with their presence as did the Bishops of Tropaiou and Kyaneon,  Athanasios and Chrysostomos respectively .

Paying tribute to His Eminence, Federation President, Mr. Peter Droussiotis, spoke of the Archbishop’s lifelong commitment and service to the Greek Orthodox communities of the British Isles and Ireland and of his many achievements over a period spanning  53 years.

Mr Droussiotis said: “I pay tribute tonight to our Archbishop and the spiritual leader of our Greek Orthodox communities in the UK. At the same time, I thank him, on behalf of the whole of the Greek and Cypriot diasporas in the UK, for his selfless devotion to duty and his unstinting efforts to promote the interests of our communities throughout the British Isles.

“The warmth of Archbishop Gregorios’s character, his accessibility and humanity have endeared him both to members of our community but also to the religious leaders of other communities and all of the key British institutions in this ethnically and culturally diverse country.

“Our aim is to enhance even further the close co-operation which has historically existed between the Archdiocese of Thyateira and Great Britain and the UK Cypriot Federation for the benefit of our community in this country and also of Cyprus.”

Mr Droussiotis also highlighted the warm personal relations which exist between him and His Eminence and thanked the Archbishop for his sage counsel to him and his predecessors in the role of elected leader of the community.

The full biography of Archbishop Gregorios is given below.

The Federation President’s full speech, incorporated in a news release issued in Greek, can be found here.

Archbishop Gregorios of Thyateira and Great Britain was born in the present-day Turkish-occupied village of Marathovounos in the district of Famagusta, Cyprus, in 1928. The ninth child of his family, he was orphaned at the age of three following his father’s death.

As an eleven-year-old, Gregorios, became an apprentice as a shoemaker before returning to education at the age of 20 and was later ordained deacon in 1953, by the late Archbishop Makarios III.

He graduated from school in 1954 and went to Athens to study at Athens University’s Theological School. Before receiving his university degree in February 1959, he was appointed to the Church of All Saints in London, arriving there and starting his duties at the Church of All Saints in Camden Town in April 1959 and was ordained presbyter by the late Archbishop of Thyateira, Athenagoras Kawadas.

In 1964 he was appointed Chancellor of the Archdiocese of Thyateira and, in 1970, consecrated as Bishop of Tropaeou by the blessed former Archbishop of Thyateira Athenagoras Kokkinakis at the Cathedral of St Sophia. From the first day of his ordination he undertook the organisation and administration of the St. Mary’s Cathedral and the Church of St. Barnabas the Apostle in Wood Green, North London.

On 16th April 1988 he was unanimously elected by the Sacred Synod of the Ecumenical Patriarchate as Archbishop of Thyateira and Great Britain, and his enthronement took place at the Cathedral of St. Sophia in West London.