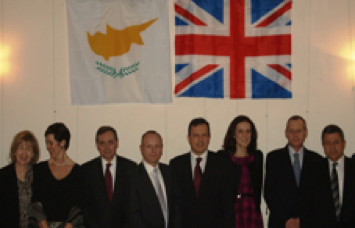 The British Cypriot diaspora recognised the commitment and efforts of longstanding political ally, the Secretary of State for Northern Ireland, Rt Theresa Villiers MP for Chipping Barnet, on Friday night, at a dinner in her honour, hosted by the National Federation of Cypriots in the UK. The dinner was also an opportunity to celebrate Ms Villiers’ many political achievements including her elevation to the Cabinet last year.
An audience of dignitaries and British Cypriots heard their host, Federation President, Mr Peter Droussiotis, pay tribute to Ms Villiers. In an address reflecting on the ascent of Ms Villiers political career and her support for Cyprus, he said:

“On Cyprus, Theresa has long been a stalwart and an asset to the UK Cypriot community. At our rallies and Parliamentary events, it is vital for us to demonstrate support from those who influence British foreign policy. Theresa’s increased profile is also good for our cause, of which she has so long been a strong supporter: she has long shown her solidarity with our member associations, for which we are equally grateful.”

“We, the Cypriots of the UK, will remain on the side of this island and we will do whatever we can to help Cyprus recover from this latest crisis. In this effort we will rely, as ever, on the help and solidarity of our political friends, of whom Theresa is a prime example.”

Mr Droussiotis then presented the guest of honour with a commemorative plaque as a token of thanks for her past, ongoing and future work for the cause of a free and reunited Cyprus. Ms Villiers responded by expressing profound thanks and deep appreciation to the Federation for the honour and then said:

“I’d like to thank the wider Cypriot community for all the support that it has given to me over so many years. Barnet is very proud of its Cypriot community – it plays such a wonderful role across the borough and London, culturally, socially and economically. And I, of course, will continue to campaign with you for justice in Cyprus until we see a just, balanced and lasting solution.”

The event took place at the Federation’s headquarters in north London.  Joining the three Vice-Presidents, the Executive and the Secretariat of the Federation as well as other prominent members and representatives of the British Cypriot community were Villiers’ fellow MPs David Burrowes and Mike Freer, the Greek Ambassador (H.E. Kostantinos Bikas) with his wife, the Cyprus High Commissioner(H.E. Alexandros Zenon), the Deputy Mayor of Barnet (Cllr Kate Salinger) with her husband, the Leader of Barnet Council (Cllr Richard Cornelius) and the President of the World Federation of Overseas Cypriots (Mr Haris Sophoclides).