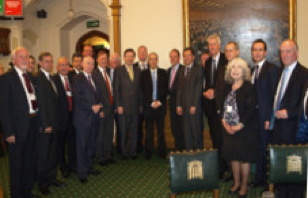 Cyprus Foreign Minister, Ioannis Kasoulides, last night spoke of the ‘special relationship’ between Britain and Cyprus, and expressed his government’s views on the island’s eurozone crisis, the future of negotiations to reunite Cyprus, and the economic potential of reserves of natural fuels to be mined off the coast of the island.
At a dinner in the Palace of Westminster, hosted by Peter Droussiotis, President of the National Federation of Cypriots in the UK, British politicians joined Federation officers and other prominent members of the UK Cypriot community for what Mr Kasoulides described as his “key-note speech of the year”.

Introducing Mr Kasoulides, who was appointed Foreign Minister in February by the incoming President, Nicos Anastasiades, Peter Droussiotis spoke of the British Cypriot community’s anger and dismay at the unfairly selective treatment meted out to Cyprus by the eurozone authorities and the IMF. He said:

“The troika has extracted its pound of flesh in Cyprus and has made the island pay dearly for the eurozone’s policy failures in Greece and elsewhere. Alternative solutions, including re-capitalisation of the two main Cypriot banks and their effective ‘nationalisation’ by the European Central Bank, were not given the time of day. Such measured solutions, which could have been further calibrated by a more managed contraction of the banking sector, over a transitional period, were set aside with the result that Cyprus’s economy has now suffered a devastating blow.”

Mr Droussiotis then pointed to the commitment shown by high profile British Cypriot business people and philanthropists, several of whom were present at the dinner, to act as Cyprus’s ambassadors abroad in a bid to attract investment from Britain and Europe in vital sectors of the Cypriot economy such as tourism, services, education and culture and energy.

He said that, on a visit to the island last week he and the UK Cypriot entrepreneurs who accompanied him, were encouraged by the calibre and degree of engagement from all of the people they met, including President Anastasiades and Archbishop Chrysostomos.

“We were struck by the dignity with which the Cypriot people have handled the crisis. Although hard times lie ahead, I have no doubt that their spirit of enterprise, their ingenuity and their resilience will enable the island to recover and prosper once again” concluded Mr Droussiotis.

Cyprus’s Foreign Minister, in his speech, admitted that Cyprus ought to have acted earlier to deal with its rapidly deteriorating economic problems but added:

“We could neither have predicted the way that Cyprus was treated by its [EU] partners, nor the unprecedented decision of the Eurogroup to impose a haircut on depositors. This treatment of a fellow EU partner, which can hardly be described as solidarity, has left us with a feeling of disappointment and bitterness… Instead of being treated as an EU partner, Cyprus became an economic guinea pig.”

Mr Kasoulides went on to talk about the ‘bail in’, whereby Cypriot depositors took the brunt of much of the economic collapse of Cyprus’s economy, saying:

“The ‘bail in’ is supposed to be the saviour of the EU taxpayers. I disagree: what this forgets, or intentionally disregards, is that this solution affects real people. It destroys the backbone of the economy, makes savings disappear overnight, leads businesses to bankruptcy and creates unemployment.”

The Foreign Minister spoke of his optimism that the people of Cyprus can overcome the crisis, as they have overcome disaster before:

“Cypriots are resilient, hardworking people. The Turkish invasion of 1974 left our economy totally destroyed. We overcame [these problems] and in a few years, these efforts led to the Cyprus economic miracle. The reaction of our people to these events and the way they face the future is dignified and determined. That is why I am convinced that as we overcame those harsh difficulties in the past, we are going to do so again.”

Mr Kasoulides went on to thank the UK Government for its assistance during the crisis, including the “expeditious dispatch” of a team of experts from Her Majesty’s Treasury and from the Bank of England to advise on the restructuring of Cypriot banks.

On the matter of negotiations relating to the reunification of Cyprus, Mr Kasoulides called for patience and a respect for the need to take stock of the economic crisis before forging ahead, referring to the need to “cultivate a positive climate before and during the negotiations. We also need a new methodology of talks…not everything is dependent solely upon the two communities.”

There followed an ‘off the record’ questions and answers session, in which the Minister gave his views on matters such as the UK’s role in the resolution of the division of Cyprus and the decision of the island’s government to retain the euro as its currency.

Lord Dykes, the Liberal democrat peer, gave the vote of thanks, as one of the three co-sponsors, along with Rt Hon Theresa Villiers MP (Secretary of State for Northern Ireland), and Labour’s Sir Alan Meale MP. Lord Dykes thanked the evening’s guests for their commitment to Cyprus, paying tribute to the Foreign Minister for his insights and presence, and expressing gratitude to the National Federation for Cypriots for hosting the event.

At the dinner’s top table, the guest of honour, Foreign Minister Kasoulides, was joined by the function’s host, Peter Droussiotis, as well as the Greek Ambassador to the UK, HE Constantinos Bikas, the Cyprus High Commissioner, HE Alexandros Zenon, veteran Labour MP Sir Gerald Kaufman, Lord Dykes, Deputy Leader of the Liberal Democrat party Simon Hughes MP, and Chairman of the All Party Parliamentary Group on Cyprus, David Burrowes MP.