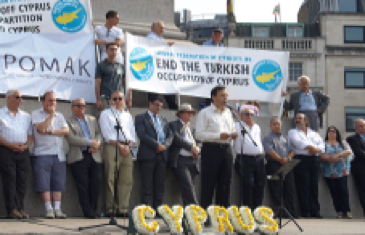 The British Cypriot community sent a clear and loud message to Prime Minister David Cameron today, as the Cypriot diaspora were joined by politicians from across Britain’s political spectrum: Britain can and must act to reverse the failure of the international community over the tragedy of a divided Cyprus.

In a show of solidarity against Turkey’s continuing illegal military occupation of the northern part of Cyprus, MPs, MEPs, Councillors and other friends of Cyprus joined the National Federation of UK Cypriots’ well-attended annual demonstration at the Turkish Embassy, followed by a march through central London, and a rally at Trafalgar Square.

Federation President, Mr Peter Droussiotis, accompanied by Federation officers Andreas Papaevripides and Bambos Charalambous and leading representatives of the overseas Cypriot youth, delivered a petition to Downing Street, calling for action from Prime Minister David Cameron to address Turkey’s intransigence on the matter of Cyprus. The subsequent rally in Trafalgar Square was addressed by Mr Droussiotis, Mr Nicos Kouyialis (the Republic of Cyprus’s Minister for Agriculture, Natural Resources and the Environment), the Mayors of occupied Kyrenia and occupied Akanthou and British politicians from the main parties.

Mr Droussiotis opened the rally by invoking memories of the invasion and castigating the failure of the international community to resolve the Cyprus problem:

“A generation may have passed but the memory of injustice still burns and our passion for justice remains deeply ingrained. The 39th anniversary of Turkey’s invasion marks many evils, but also symbolises the failure of the international community to hold Turkey to account.

“This failure is shared by the United Nations and by the mighty European Union, whose principles and values have been systematically violated by an arrogant Turkey. But the failure also lies with successive British governments, which have sought to appease Turkey in relation to Cyprus.

“The British government can and must do more to exert pressure on its strategic ally, Turkey. Cyprus is up against an intolerant and authoritarian Turkish Prime Minister who has problems with pluralism in his own country. Mr Erdogan does not engage on Cyprus, other than on his own terms, which, if accepted, would amount to the island’s total capitulation to Turkey’s neo-Ottoman demands.

“The flame of liberty in our hearts still burns; it will not be extinguished; our hope endures; the dream lives on; the struggle continues and will not stop until the bells of freedom ring from every corner of the island.”

The Mayors of Kyrenia and Akanthou, Glafcos Kariolou and Savvas Savvides respectively, then spoke, both of them thanking the National Federation of Cypriots in the UK for its persistent efforts in lobbying the UK government to take action to resolve the Cyprus problem.

Charles Tannock, MEP for London, attending his 13th consecutive rally for Cyprus, told the rally of his hopes for economic recovery for Cyprus and committed himself to continue to work for Cyprus in the European Parliament, alongside Cypriot MEPs.

Sir Alan Meale MP (Labour, Mansfield), attending the rally despite being very recently discharged from hospital, cited the recent civil unrest in Turkey in protest of the Turkish government, saying that the lack of a strong response from the international community portrayed Turkey as “almost the untouchables of the European community”, bemoaning the lack of action against a Turkish government that betrays justice and human rights in Cyprus.

Rt Hon Simon Hughes MP (Deputy Leader of the Liberal Democrat Party and Member for Bermondsey and Old Southwark), stated “that we have an unresolved issue in our continent, within the European Union, within the Commonwealth, is an unacceptable indictment of successive British governments over that period. If there was real political will, it would be possible before the 40th anniversary of the invasion next year, to find a solution.” Mr Hughes also called upon his colleagues in government to place Cyprus more highly on its agenda.

The recently elected Chairman of the All Party Parliamentary Group for Cyprus, Matthew Offord MP (Con, Hendon), talked of his visit to Cyprus last year, and the threat of being arrested for travelling in the occupied area. He recalled the army camp that he had seen, built on the former site of a cemetery and a Greek Orthodox church. He looked to the EU for action, saying “how can we have the island of Cyprus in the EU, invaded and occupied by Turkish troops? It is not acceptable. We will continue our fight and we will not forget the people of Cyprus.”

Mr Nicos Kouyialis, Agriculture Minister of Cyprus, related the gratitude of the President and the Government of Cyprus, to the organised British Cypriot diaspora for its invaluable efforts in pushing for the reunification of the island, stating that a just and lasting settlement remains the top priority of the Cyprus government. He said that his Government “has all the good will necessary to make a solution possible” and warned that “the current economic misfortune of Cyprus must not be seen as part of a solution” to the Cyprus problem.

Among the other British politicians lending their support by attending the event were Rt Hon Theresa Villiers MP (Secretary of State for Northern Ireland and Conservative Member for Chipping Barnet), Mike Freer MP (Con, Finchley and Golders Green), Andrew Dismore (Lab, Member of the Greater London Assembly for Barnet and Camden) and Cllr Brian Coleman (Independent, Totteridge ward, Barnet). Former Member of Parliament, Ian Twinn, long-time veteran of the Cyprus cause, once again demonstrated his solidarity by attending. The Cyprus High Commissioner HE Alexandros Zenon represented the Cyprus High Commission in London along wide a delegation of senior Cypriot diplomats in London.

Mr Droussiotis closed the rally by calling Federation Secretariat members to join him in presiding over a minute’s silence to honour the missing people and all of those who have fought for freedom and democracy in Cyprus.