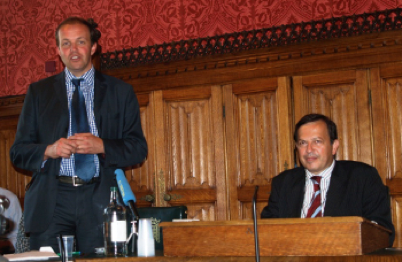 Parliamentarians from across the political spectrum last night reiterated their support for a free and reunited Cyprus, and their solidarity with the island’s and the Cypriot diaspora’s efforts to bring an end to the division of the island and finally reveal the fate of people who went missing during Turkey’s military invasion of the island nearly 40 years ago.

At a demonstration outside Parliament and the National Federation of UK Cypriots’ subsequent meeting in the House of Commons on Tuesday night, Parliamentarians joined relatives of missing people, and leading representatives of the British Cypriot community, to mark the 39th anniversary of Turkey’s invasion of Cyprus. The events have been held annually in July ever since the island’s invasion and continue to elicit new strong cross-party Parliamentary support.

Welcoming those present in Parliament’s Committee Room 16, Peter Droussiotis, Federation President, spoke of the tragedy of the on-going nearly 4 decades’ old occupation and colonisation of Cyprus. He said:

“39 years of anguish for the relatives of the missing; the utter injustice of division, ethnic cleansing, cultural genocide, religious desecration – these are the consequences of the pernicious legacy of Turkey’s invasion of Cyprus in 1974.

“The tragedy of this island is made even more profound because the will of the United Nations has been defied, with complete impunity, by successive Turkish governments, for nearly 40 years, which makes today an anniversary of failure too – the failure of the international community to hold Turkey to account.

“Turkey’s Prime Minister Erdogan has a problem with pluralism in his own country and shows no signs of engaging on Cyprus other than on his own terms, which would mean the island’s total capitulation to Turkey’s neo-Ottoman demands.

“Our plea to our friends in Parliament is to keep the pressure up on the British Government, a key player, so that it acts decisively in order to help create a climate in which Turkey faces up to its responsibilities; so that any underhand moves to exploit the Eurozone and IMF-inflicted economic crisis on the island in order to impose its permanent partition are stopped in their tracks.”

The event, which was sponsored by eleven Conservative, Labour and Liberal Democrat MPs and peers*, heard impassioned contributions from many parliamentary friends of Cyprus, including relatively recent conscripts to the Cyprus cause, Julian Huppert MP (Lib Dem, Cambridge) and Caroline Nokes MP (Con, Romsey and Southampton).

Mr Huppert emphasised the combined need to help Cyprus out of its current economic plight and to oppose Turkey’s military occupation of the island on the grounds of principle and human rights.

Former Chair of the All Party Parliamentary Group on Cyprus, David Burrowes MP (Con, Enfield Southgate) said: “We shouldn’t tolerate occupation and the denial of human rights. We must not tolerate what has happened to Famagusta and that people cannot return to their homes. And we must not tolerate that people are still missing.” He went on to state his pride in the actions of the UK in “standing tall” with Cyprus, to help it with its economic troubles.

Jim Sheridan MP (Lab, Paisley and Renfrewshire North), talked of the current climate of civil unrest in Turkey, and pressures on Turkey’s border with Syria, saying “Turkey has enough problems of its own regarding human rights and now would be an ideal time for Turkey to start looking at itself and leave Cyprus to itself, and leave Cypriots to solve their island’s division.” He went on to express concern that the natural resources to be mined off the coast of Cyprus might present “another opportunity for Turkey to interfere in Cyprus”.

Mr Sheridan also told the meeting that the Council of Europe committee looking at missing persons would be publishing a report in October, which would put pressure on countries, including Turkey, to fulfil their responsibilities to the families of missing people.

Caroline Nokes MP joined the top table of the annual event for the first time and announced her support for the efforts to reunite Cyprus, saying: “I do not profess to be an expert on Cyprus but I can recognise an injustice when I see one… Turkey has a duty to uphold its obligations.” She later stated her commitment to raise the matter of Cyprus in Parliament in the future.

Andy Love MP (Lab, Edmonton) stressed that the British Government’s treaty obligations must be reiterated: “I am not overstating the case when I say that Cyprus looks to the UK as an international player, to move the situation forward. The Government should accept that Cyprus needs to be pushed up the international agenda set in the context of the discovery of gas and the failure of Turkey to agree on anything over the years.”

Multiple contributions from the floor, including a passionate intervention from veteran friend of Cyprus, former Labour MP Tom Cox, made for a lively dialogue which covered a range of issues including the discovery of oil and gas within Cyprus’s Exclusive Economic Zone, the structure of a negotiated settlement, the format of any negotiations, the Cypriot diaspora’s work with British Parliamentarians and the role of the UK Government as an influential player in relation to Cyprus.

Earlier, at the demonstration organised by the Organisation of the Relatives of the Missing, Lord (Toby) Harris, Matthew Offord MP, Mike Free MP and Wayne David MP all called for actions to determine the fate of the missing.