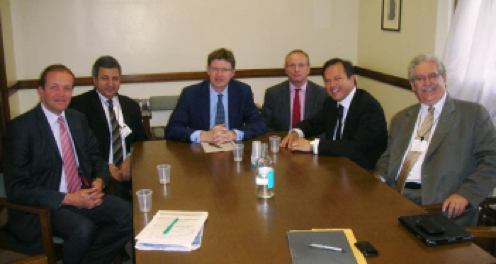 A Federation delegation recently had meetings with both Greg Clark MP, Financial Secretary to the Treasury, and Lord Stephen Green, Minister for Trade & Investment at the Department of Business, Innovation and Skills.

The Federation representatives, Peter Droussiotis (President), Bambos Charalambous and Ninos Koumettou, (Vice-Presidents) and Andreas Papaevripides (Treasurer), met the Ministers to discuss the economic crisis in Cyprus and to explore ways in which the Cypriot diaspora in the UK, with the British Government, can promote bi-lateral trade between Britain and Cyprus and inward investment to the island.

The meetings, which were constructive and held in a cordial atmosphere, were facilitated by Mike Freer MP and also attended by David Burrowes MP.

“Both of the meetings focused on potential initiatives that UK Cypriots can undertake, with the support and involvement of the British Government and UK trade agencies, in order to help promote Cyprus to British investors.

“They were also an opportunity to thank the UK Government for its constructive stance following developments on the island back in March. Although Britain is outside the eurozone, its voice carries weight on the continent and my colleagues and I were able to urge the UK Ministers to support Cyprus’s positions within the European Union.

“These meetings are part of a continuing dialogue which I hope will lead to the implementation of practical measures in the foreseeable future, including a high-profile event with the participation of Cypriot Ministers, the Cyprus Investment Promotion Agency, and high-calibre British Cypriot entrepreneurs.”

The meetings also touched on the possibility, viewed favourably by both Ministers, of official Ministerial visits to the island in the next few months.