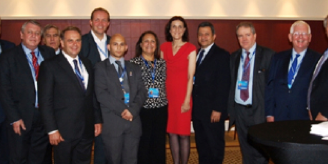 A fringe reception at the Conservative Party‘s annual conference in Manchester yesterday evening offered assurances of the coalition’s main party’s commitment to the delivery of a comprehensive settlement to the Cyprus problem. Conservative politicians also welcomed the election earlier this year of Nicos Anastasiades, former leader of their sister party, as President of Cyprus.

For a successive year, attendees included politicians ranging from the cabinet to local councillors, candidates and delegates. The event was organised by the group Conservatives for Cyprus, the Democratic Rally (DISY) UK (the UK branch of the Conservative Party’s Cypriot sister party) and the Greek Cypriot Brotherhood, under the auspices of the National Federation of Cypriots in the UK.

Chairman of the Democratic Rally UK, Federation Treasurer and President of POMAK (worldwide federation of Cypriots), Mr Andreas Papaevripides, welcomed guests to the event, thanking them for their support and bidding for optimism over the Cyprus problem:

“We will not forget that, during the difficult times that Cyprus suffered in March this year, the only country who stood by us was Britain.

“On the Cyprus issue, we are expecting negotiations to re-start, maybe in November, President Anastasiades has made clear that they will start on the right footing, and that they will have clear objectives. But Turkey must take a different stance – Turkey’s intransigence of the past cannot be tolerated.

“Famagusta will be on that agenda, with the Republic’s proposal of returning it to its citizens to create good momentum for the negotiations and we can only hope for a positive response from Turkey.”

Marina Yiannakoudakis MEP thanked the Cypriot community for its positive role as a minority community in Britain, before handing over to fellow London MEP, Charles Tannock, who decried the tragedy of nearly 40 years of occupation in Cyprus. He added that he and Marina would be “submitting a written declaration in the European Parliament calling for the return of Famagusta to the Republic of Cyprus”. He also paid tribute to outgoing High Commissioner Alexandros Zenon for his work in the UK during his tenure.

David Burrowes MP (Enfield Southgate), former Chair of the All-Party Parliamentary Group for Cyprus, talked of the “window of opportunity” open to Cyprus:

“We must ensure that we work with President Anastasiades to show confidence in the negotiation process, roll up our sleeves and fight hard for Cyprus and for each other.”

Secretary of State for Northern Ireland, Theresa Villiers MP (Chipping Barnet) conveyed warm wishes and support from the Minister for Europe, David Lidington MP, who was unable to attend as he was in Brussels. However, he did send a statement, which Ms Villiers referred to:

“We congratulate President Anastasiades and our friends in Democratic Rally on his election victory in February and we are keen to strengthen our relationship across the board – on foreign policy, the EU and economic issues and commercially.

“The Government of Cyprus is making great efforts to get the Cypriot economy back on track and it is in all our interests that those efforts succeed and the Cypriot banking system is returned to health.

“The economic crisis is, of course, the Cypriot Government’s immediate priority but we shouldn’t lose sight of the importance of a settlement to Cyprus’ long term prosperity and security. We hope to see talks re-starting soon and stand ready to offer whatever help we can.”

Ms Villiers then spoke as MP for Chipping Barnet, firstly thanking her co-hosts, guests and organisers. She also spoke of the “considerable hardship” of Cypriot people as a result of the economic crisis but praised the British Government’s response:

“We sent top treasury officials and the Chancellor moved very swiftly to ensure that British Cypriots with deposits with Laiki Bank in London were not drawn in to the turmoil of the banking crisis. This was action beyond the legal obligations of the UK Government but the Chancellor was in no doubt that it was the right thing to do for British Cypriots

“We continue to be very supportive of the efforts of Cyprus to seek a negotiated, just, balanced and lasting settlement, and we know that the new President in Cyprus is determined to do that. I applaud the proposals to return Famagusta to its inhabitants, creating economic benefits for its communities – it really is a win-win situation.”