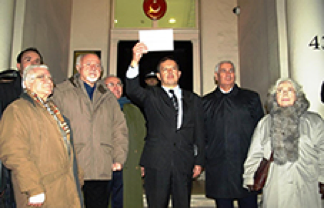 On a day darkened by the passing away of former President of the Republic of Cyprus and a great European statesman, Glafcos Clerides, British Cypriots continued his struggle and that of their country of origin, in protesting against three decades of the self-proclaimed illegal regime in the areas of Cyprus occupied by the Turkish army.

Picketing the Turkish Embassy in London last night, a vocal demonstration, organised by the National Federation of Cypriots in the UK, made itself heard despite the Embassy’s refusal to recognise the protest, formally accept the resolution put to it by Federation President Peter Droussiotis and members of the organisation’s Executive and Secretariat, or to engage in dialogue with British Cypriots.

The letter of protest demanded the withdrawal of the Turkish occupying army and the Turkish colonists illegally transferred by Turkey to the north of Cyprus and called on the Turkish government to abide by the resolutions of the UN Security Council and international law. It also called upon Turkey finally to resolve the human tragedy of the Cypriot people who went missing during its invasion of the island in 1974.

Federation member associations, UK Cypriot youth organisations and large numbers of Cypriot students in the UK showed their resolve against the illegal occupation and the self-proclaimed pseudo-state, which remains unrecognised by all countries in the world except Turkey.

“There is no denying Turkey’s role in attempting to sustain this illegal and unrecognised puppet regime. For thirty years, it has been a staple part of Turkey’s bullying behaviour, representing a huge security threat to stability on the island and in the region.

Turkey gains nothing from continuing this façade in the occupied area, or from its outright failure to meet its international obligations in relation to Cyprus. The world will not and cannot tolerate Turkey’s injustices in Cyprus indefinitely. The puppet regime in the occupied area is testament to Turkey’s aggression against a vulnerable smaller state and, after three decades, remains an embarrassing, shameful and vivid example of Turkey’s already poor human rights record and the most important obstacle in Turkey’s proclaimed intention to join the European Union.”