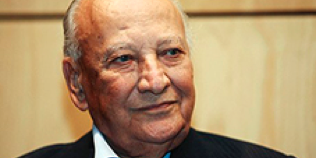 The President and the Secretariat of the National Federation of Cyprios in the UK extend their deepest sympathies to the daughter, son-in-law and the rest of the family of former President of Cyprus, Glafcos Clerides, who passed away on 15th November 2013 at the age of 94.

“Glafcos Clerides was a great European statesman, a wise, fearless and highly principled politician who served Cyprus with great distinction throughout his long and eventful life” said Peter Droussiotis, Federation President. “Guided by the ideals of justice, democracy and freedom for which he fought, as a young man during World War II in the British Royal Air Force, and then as a lawyer and politician, Glafcos Clerides dedicated his entire political life to the struggle for a free, united and independent Cyprus. He was a visionary but also a pragmatic politician and an articulate advocate for the unity of Cyprus who led the island into the European Union, perhaps his greatest achievement.

“President Clerides will always be remembered by all Cypriots, whether living on the island or overseas, with great affection and admiration. His example of public duty and sacrifice should be emulated by future generations of Cypriots wherever they may be. Αιωνία του η μνήμη.”