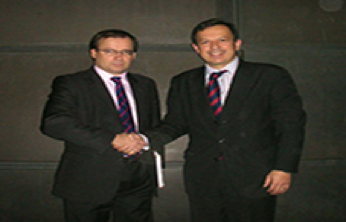 Gareth Thomas MP, the UK’s Shadow Minister for Europe, met with the President of the National Federation of Cypriots in the UK, Peter Droussiotis on Tuesday. At a meeting in Parliament to discuss Cyprus and issues affecting the British Cypriot community, Mr Thomas expressed a keen interest in developments relating to Cyprus.

As the 40th anniversary of the invasion and subsequent occupation of the island approaches, next year, and in the aftermath of the economic crisis that beset the island earlier this year, Mr Thomas spoke of his party’s good will towards a historical ally and fellow European Union and Commonwealth member.  He also expressed appreciation for the Cypriot community’s economic and social contribution to British society.

Peter Droussiotis conveyed the reassurance he gained from the meeting, saying:

“The Shadow Minister left me in no doubt as to the Opposition’s full commitment to the UN-led negotiating process currently under way. Both the Government and Opposition stand fully behind that process but I remain of the view that the UK can and must do more to encourage Turkey to play a constructive role, not least because of Britain’s responsibilities as a Guarantor Power in Cyprus.

“Mr Thomas assured me that his door is open, and I look forward to developing our dialogue in the future. It has long been the policy of our Federation to engage not only with the British government but also with opposition parties, to ensure that Cyprus remains high on the UK’s foreign policy agenda and I feel assured that Gareth will make representations to that end.”

Mr Thomas accepted Mr Droussiotis’s invitation to attend a dinner-discussion with the Federation’s Secretariat in the early part of the New Year.