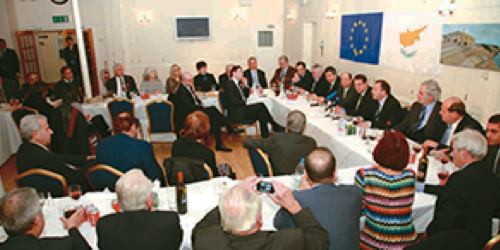 We will never give up the struggle for Cyprus to overcome the problems that is facing today, said the President of the Republic Mr Nicos Anastasiades, who is in London for a four-day visit.

Speaking on the side-lines of a dinner hosted for him by the National Federation of Cypriots in the United Kingdom, the President of the Republic said that UK Cypriots, without any self-interested pursuit and “expressing their pure love for Cyprus, are fighting and have succeeded significantly at least with regard to the stance and important resolutions that have been issued about Cyprus,” and he expressed gratitude on behalf of the people and the state of Cyprus to all members of the UK Cypriot diaspora.

The President referred to his announcement made earlier in the year of a series of measures adopted to address the economic problems of Cyprus, offering incentives and encouraging investments.

He also emphasized the determination of the Cyprus government to implement everything that is dictated by the loan agreement. He expressed satisfaction because through the discipline demonstrated by the Cyprus Government there were two positive evaluations by the Troika and an upgrading of the Cyprus economy by a credit rating firm.

He also made reference to the campaign by the government to attract foreign investments and his own visits to a number of countries including Qatar, the United Kingdom, China, Russia and others.

He added that through the measures that the government announced for the attraction of foreign investments, the inflow of one billion euros into Cyprus was achieved.

“My presence here today, in addition to the further deepening of our relations with the British government, aims also to promote the advantages of Cyprus as a business centre and the opportunities that British businessmen have to invest in the tourism and services sectors but also in areas related to the hydrocarbons industry,” said President Anastasiades.

Referring to the Cyprus problem, the President of the Republic said that  “our top priority is to solve it”. “I had submitted a set of proposals which did not aim to satisfy the Greek Cypriot positions but in order to give a new momentum to the dialogue and which addressed the expectations of all those that wanted a solution, whether they be Cypriots, Greek Cypriots and Turkish Cypriots, or third parties interested in the peace and security in an important hotspot that can provoke turmoil at any given moment, but also those that wish to look after, what in their view, are Turkey’s best interests.”

The President said that the stance of Dervis Eroglu, the leader of the Turkish Cypriot community, and his persistence in repeating every day that what he seeks are talks between two equal sovereign states, would drag us into a dialogue that has proven over 40 years that time was spent in endless discussions without a result.

“I am particularly distressed that powers which undertook to help and which could play a role, seem to have pulled back at the last moment, and as a result the expected pressures were not exercised on Turkey that it should proceed with bold steps as far as confidence-building measures are concerned, which would have actually created the new environment, the new trust and the new momentum in the negotiation,” the President said.

Referring to the joint communique (with regard to the inter-communal talks), the President of the Republic said that “unfortunately, one again it did not move forward because Mr Eroglu’s side insists on two sovereign states, .. ..on maintaining sovereign rights [for the two constituent states], a fact that indicates that behind the thinking of ‘Plan B’ of the Turkish Cypriot side is nothing else other than secession at some moment they consider suitable, so that they can create a second state.”

On his part, the President of the National Federation of Cypriots of the United kingdom Mr Peter Droussiotis gave assurances that the entire Cypriot community of the UK stands by Cyprus and stressed that the Federation is constantly upgrading its work in Britain and that it remains focused and united in its efforts to promote the just cause of Cyprus both in the British Parliament and in the country’s media.

Source: Presidency of the Republic of Cyprus.