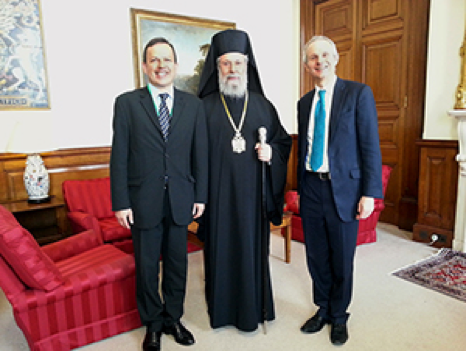 Archbishop Chrysostomos II of Cyprus and Bishop Christophoros of Karpasia (the island’s long, finger-like peninsula occupied by the Turkish army since 1974) were accompanied by UK Cypriots’ Federation President, Peter Droussiotis, to meetings in Westminster on Thursday.

At separate meetings with the Minister for Europe, David Lidington MP at the Foreign Office, and the Shadow Minister of Europe, Gareth Thomas MP at the House of Commons, the delegation made the case for the urgent restoration and protection of Cyprus’s religious and cultural heritage in the areas of the Republic of Cyprus occupied by the Turkish army.

Since Turkey’s invasion and subsequent occupation of 38% of the island in 1974, countless independent reports have presented irrefutable evidence of the deliberate vandalism and destruction of many of the island’s historic Greek Orthodox Christian churches and monasteries as well as the desecration of graveyards and cemeteries.

Both Mr Lidington and Mr Thomas expressed their support for the efforts by Archbishop Chrysostomos II to seek access to Christian places of worship and other sacred sites and religious monuments in the occupied areas with a view to resurrecting, restoring and maintaining these and said that they would raise the matter both with Turkey and also with the Turkish Cypriot leadership.

“A very painful but sometimes overlooked aspect of the tragic invasion and occupation of Cyprus by the Turkish army has been the wilful sacrilegious destruction of many of the island’s churches, monasteries and other places of Christian worship. These sites and monuments are of huge cultural and religious significance and belong not only to the Cypriot people who have been unjustly deprived of their use for nearly forty years, but to the whole of humanity.

“Every effort must be made by the international community to put an end to the neglect and wanton destruction of such places and to allow access so that these can be restored and protected in the future. I am pleased, though happily not surprised, that our case was received sympathetically both by the Minster and by the Shadow Minister.”