Rally in Trafalgar Square for a Free, United Cyprus 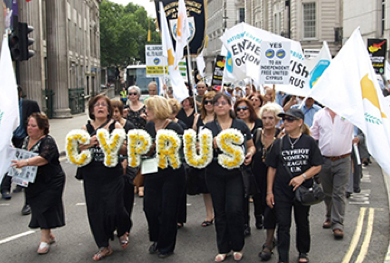 The President of the National Federation of Cypriots in the United Kingdom, Peter Droussiotis, today called on British Cypriots and everyone who supports justice and human rights, to voice a collective call for a free, united Cyprus at a rally in Trafalgar Square on Sunday 13th July.

Urging the need for Cypriots to turn out in force to remind the world of the landmark 40th anniversary of the invasion of Cyprus, Mr Droussiotis urged the Cypriot diaspora and friends of the island to make clear to Prime Minister David Cameron and the wider international community the strength of opposition to Turkey’s continuing military occupation.

“The annual rally, organised by the Federation every year since the invasion of Cyprus in 1974, marks the tragic anniversary of that disgraceful event – an event that shames Turkey and all countries that stand by and allow it to break the law with impunity.

“It is the biggest gathering of UK Cypriots and friends of Cyprus in Britain, uniting to protest the illegal, scandalous division that still plagues the island four full decades after the Turkish army invaded and occupied its northern territory.”

“This is a major, dark anniversary, and so it is crucial for British Cypriots and our friends in the UK to demonstrate, in large numbers and loud voices, our support for a free and united Cyprus.”

The rally will begin at 3.15pm in Trafalgar Square. A Federation delegation will hand in a petition to the British Prime Minister at 10 Downing Street prior to the rally.

The main speaker at the event will be Yiorgos Lakkotrypis, Minister of Energy, Commerce, Industry and Tourism of the Republic of Cyprus. British Parliamentarians and MEPs will join Mr Droussiotis and his colleagues, as well as representatives of Cypriot refugee organisations and occupied municipalities in Cyprus, on the platform in Trafalgar Square to show their solidarity with the Cyprus cause.