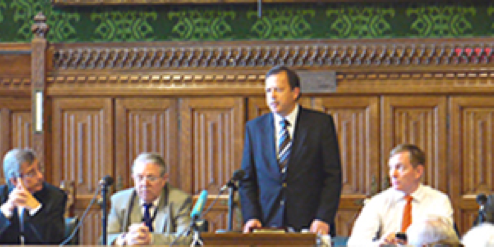 UK Parliamentarians from across the spectrum roundly condemned 40 years of division and occupation in Cyprus on Tuesday evening, at events hosted by the National Federation of Cypriots in the UK in Parliament.

In his introductory speech, Peter Droussiotis, President of the National Federation of Cypriots in the UK, who chaired the meeting, pointed to the injustice of four decades of military occupation of the northern part of Cyprus by the Turkish army, castigated Turkey’s continuing intransigence and called on the international community to act:

“Tonight, we mark four decades of military occupation in Cyprus. We mourn 40 years of anguish for the relatives of the missing; the utter injustice of division, ethnic cleansing, cultural genocide, religious desecration. These consequences are the pernicious legacy of Turkey’s invasion of Cyprus in 1974.

“But the tragedy of this island is made even more profound because the will of the United Nations has been defied, with complete impunity, by successive Turkish governments, for 40 years, which makes today an anniversary of failure too – the failure of the international community to hold Turkey to account.

“Cyprus is up against an authoritarian and intolerant Turkish Prime Minister who has a problem with pluralism in his own country…… The UK remains a crucial player, with historic treaty obligations to Cyprus. It maintains military bases on the island and is Cyprus’s partner in the EU, in the Commonwealth and in the United Nations. It is also a strategic ally of Turkey. As such, we believe that the influence of British Parliamentarians is of vital importance to the Cypriot diaspora’s mission to help deliver long lasting unity and justice for Cyprus.”

The President of the Committee of Relatives of Missing Persons in Cyprus, Mr Nicos Serghides, called for credible answers and investigations to determine the fate of all missing persons. He warned that “if the rate of returns of remains of missing persons does not quicken, there will be no parents left alive to receive the remains of their children”.

Contributions from parliamentarians were interspersed with questions from the audience throughout the evening but began with an address from Lord Harris of Haringey, who expressed his regret that 40 years had passed without a resolution to the Cyprus problem and the fate of missing people. He also praised the British Cypriot community’s contribution to British culture.

Former Minister for Europe and member of the Labour Party’s shadow team, Chris Bryant MP, also decried the lack of progress in efforts to reunite Cyprus. He said that “Europe cannot say it is at peace while it has within it a capital city that is divided, in which you cannot walk form one side to the other without passing through a buffer zone”.

Jim Sheridan MP criticised the fall in the rate of exhumations in the search for missing people, blaming a lack of cooperation from the Turkish authorities. He called on the UK Government to ensure that more resources are given to the search for the missing people, as well as pressure to compel compliance and action in negotiations to reunite the island.

Costas Efstathiou, Vice-President of EDEK (a Cypriot social-democratic political party), also addressed the issue of the missing and questioned why Turkey had been exempted from being accountable to the International Criminal Court on the matter.

Sir Alan Meale MP spoke of the economic importance of Cyprus to the EU, calling for its contribution to be reciprocated with support for the human rights struggles on the island. He asked “if human rights are important everywhere else in the world – where the international community acts decisively and quickly – why is that not the case in Cyprus?”

Shadow Minister for Europe, Gareth Thomas MP, pledged to work “to ensure that the European Union remains focused on the Cyprus problem”, saying that all injustices on the island must be brought to a conclusion, adding that he would be consulting with the Federation and other organised groups in the Cypriot community in the UK to inform policy in that regard.

Andy Love MP pointed to the recent visit of US Vice President, Joe Biden, as a sign that there is hope that the problem of Cyprus is moving up the agenda of the international community. He said that “while the negotiating process has gone faster and has happened more regularly than in the past, the answer still lies in Ankara… Cyprus must be reunited, for   Turkey to join the EU.”

David Burrowes MP said “We must remind the world that the injustices of 40 years ago still have not changed. This as much of an injustice as those committed in Iraq and Syria and we must take the opportunity in this anniversary year to promote that fact.”

The drinks reception that followed was a less formal function to recognise and celebrate the Federation’s four decades of hard work in parliament and outside of it promoting the reunification of Cyprus as well as the social, historical and cultural heritage of the island.

Apologies and messages of support were received from Rt Hon Theresa Villiers MP, Secretary of State for Northern Ireland, and from Sir Roger Gale MP.