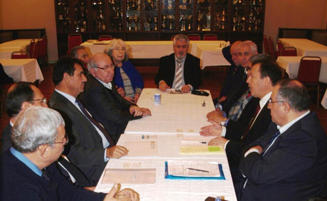 A much-anticipated exhibition of art by eight noted British Cypriot artists this week opened its doors, attracting many visitors and high praise for the quality and diversity of artistic endeavour on display. The exhibition was instigated by the National Federation of Cypriots in the UK, with much of the co-ordination of the event carried out by Renos Lavithis, one of the exhibiting artists.

At the official opening ceremony on Thursday evening, the President of the Federation, Peter Droussiotis welcomed guests. He said:

“This exhibition is not a celebration but a commemoration of forty years since the beautiful island of Cyprus was brutally invaded and forcibly divided into two parts by Turkey. It has been organised to mark the tragedy of the island’s continuing division and to remind the world that the just struggle for a free and united Cyprus goes on.

“This is also an event at which we want to acknowledge the invaluable contribution to the cause of Cyprus by the Cypriot diaspora of which the National Federation of the Cypriots in the United Kingdom, founded in the aftermath of Turkey’s invasion in 1974, is a vital force and a vivid symbol.

“Art is a powerful medium of human expression so let us hope that the art displayed here tonight can help us find a way through the grave wrong, the scars and the suffering inflicted upon Cyprus in the last forty years, to a new place of hope and expectation.”

His Excellency the Cyprus High Commissioner to the UK, Euripides Evriviades, who also addressed the gathering praised the staging of the event as part of the Federation’s enlightenment efforts to support the cause of a free, united Cyprus and also applauded the opportunity which the initiative presented to promote the wealth of Hellenic and Cypriot culture and arts, saying “we have a rich heritage and through art we can showcase our country to the world.”

On Friday afternoon, the exhibition welcomed a prestigious visitor, as Rt Hon Theresa Villiers, the Secretary of State for Northern Ireland and Member of Parliament for Chipping Barnet, accompanied by the Federation President, took time to view the artwork on display and discuss it with several of the artists present. Ms Villiers spoke warmly about the high calibre and diversity of the works on display, showing a keen interest in the inspiration behind the works and the artistic styles and techniques utilised by the various artists.

Works of art displayed at the exhibition can be seen at the individual website of the various artists which are listed below: