Concert for Cyprus’ a moving and inspiring musical experience 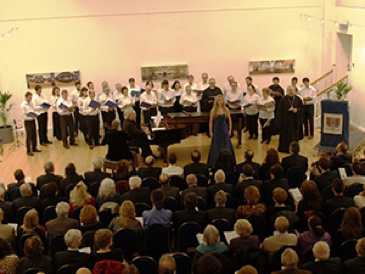 The fortieth anniversary of the invasion of Cyprus by Turkey and of the tragedy of the continuing division of the island were marked Tuesday night by a moving and inspiring ‘Concert for Cyprus’ held at the Hellenic Centre in Central London.

The concert provided an opportunity to showcase the most prominent and outstandingly talented UK Cypriot musicians and performers who captivated the huge audience of UK Cypriots and friends of Cyprus with a varied and imaginative programme of piano, hymns and songs. This included Byzantine Hymns and works appropriate to the occasion by Chopin, Verdi, Georgiades, Michaelides, Hahalis, Lidström and Theodorakis.

Organised by the Federation and staged in the beautiful Great Hall of the Hellenic Centre in Paddington Street, the Concert for Cyprus sold out prior to the event and proved to be a dazzling reflection of British Cypriot musical talent and of the rich Hellenic and Cypriot culture which forms part of the diverse mosaic that is the United Kingdom today.

The Concert was graced by the amazing talents of pianist and conductor Marios Papadopoulos, pianist and composer Christodoulos Georgiades, the Soprano Katerina Mina, the Swedish cellist/composer and friend of Cyprus Mats Lidström and the Choir of the School of Byzantine Music in London led by the popular Father Joseph Paliouras.

In his welcoming address, the President of the Federation, Peter Droussiotis, outlined the motivation behind the concert:

“The concert is not a celebration but a commemoration of forty years since the beautiful island of Cyprus was brutally invaded and forcibly divided into two parts by Turkey. It has been organised to mark the tragedy of the island’s continuing division and to remind the world that the just struggle for a free, united Cyprus goes on.

“It is also an event at which we want to acknowledge the invaluable contribution to the cause of Cyprus by the Cypriot diaspora, of which the Federation of the Cypriots in the United Kingdom, founded in the aftermath of Turkey’s invasion in 1974, is a vital force and a vivid symbol.”

HE the Cyprus High Commissioner, Mr Euripides Evriviades, who delivered the vote of thanks at the end of the concert described the experience as sublime and expressed deep appreciation to all of the participating musicians and performers.

Mr Evriviades noted the solemnity of the occasion which marked 40 long years of massive human rights violations by Turkey in Cyprus and then acknowledged the tenacity, perseverance and tieless efforts of the Federation in keeping the cause of a free, united Cyprus in the consciousness of successive British parliaments and governments for over 40 years.

All of the performances were received with acclaim and rapturous applause by the audience which overflowed into the upstairs Gallery of the Hellenic Centre.