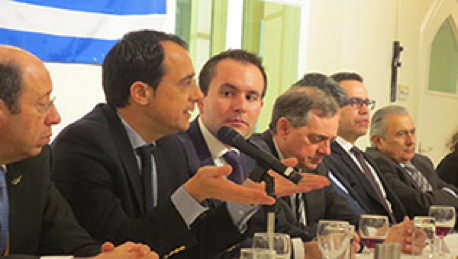 The Government Spokesman of the Republic of Cyprus, Mr Nikos Christodoulides was the Guest of Honour for this year’s celebrations of 25 March 1821 and 1 April 1955 in London.

On Saturday 19 March, the Government Spokesman held a private dinner with the Federation’s Secretariat where he discussed the latest developments on the Cyprus issue and also updated the Federation on the recent European Heads of Government meeting. Also in attendance at the dinner, amongst others was the Greek Ambassador to the UK, H.E. Konstantinos Bikas, the Cyprus High Commissioner to the UK, H.E. Evripides Evriviades and the Bishop of Tropeaou, Athanansios.

This year’s community-wide National day celebrations were hosted at Ashmole Academy on Sunday 20 March. In his public address at the celebrations, Government Spokesman Nikos Christodoulides highlighted the need for unity and collectiveness among the political parties and the people of Cyprus in order to achieve the common goal of ending the Turkish occupation of the island.

Mr Christodoulides noted that “the national liberation struggles give us the message of the importance and necessity of unity; the revolution of 1821 in Greece and EOKA’s liberation struggle in Cyprus in 1955 were successful because the goal was shared by all: to get rid of the ruler, to abolish servitude and to liberate the motherland.”

The Government Spokesman continued, “the message to all parties and to all the people of Cyprus is that a settlement within the framework in which the current negotiations are taking place would be a success for all of us, while a failure would be a loss for all of us.

“That is why I urge everyone… to work together, collectively, so that we can reach a positive settlement which will at last terminate the Turkish occupation of Cyprus. A settlement plan that will meet the expectations of the Cypriot people, so that it is accepted at a referendum. And in any case the President of the Republic would not put before the people a plan with which he does not agree and which therefore does not correspond to the expectations of the Cypriot people, expectations he is aware of and shares completely.”

He added that “in this framework, it is wrong to state one’s position from now – possibly to serve expediency of other purposes – with a ‘yes’ or a ‘no’ to a plan that is not yet before us.”

Referring to the prospect of reaching a settlement to the Cyprus issue, Nikos Christodoulides said that there are currently situations which could potentially create the condition for a positive outcome. “There are motives for a rationally thinking Turkey to comprehend the benefits of a settlement to the Cyprus issue, to Turkey itself. At the same time, there is no doubt that the problems we are facing and will continue to face will be significant. On our side we remain committed, cautiously optimistic and consistent as to the need for hard work and hard negotiation to end the Turkish occupation and to achieve the goal of delivering to the new generation a country free from occupation armies and division lines,” said the Government Spokesman, adding that “no one wishes or should wish more than us” for the occupation to end and for Cyprus to be reunified.

Speaking about the twin anniversaries, Mr Christodoulides said that they are being celebrated with a sentiments of admiration and pride, as they marked a new course for Greece and Cyprus allowing them to gain their national independence and freedom.

He also praised the Greek Cypriot community in the UK and conveyed the “gratitude” of the Cypriot state and people. As he commented, the Cypriots living in the UK are distinguished by their commitment to one single aim and that is how to best serve their beloved island of Cyprus.

On behalf of the organised diaspora, the President of the National Federation of Cypriots in the UK, Christos Karaolis, thanked the Government Spokesman for attending the celebrations and pledged to continue utilising the contacts and links established in Britain in order to promote the rights of the Cypriot people and to passionately defend the interests of the Republic of Cyprus. The Federation President also reiterated the community’s support for President Anastasiades’ efforts to resolve the Cyprus issue and expressed the community’s solidarity with President Anastasiades and all EU member countries for the “just and principled stance adopted against Turkey’s demands for the opening of EU accession chapters” at the recent European Heads of Government meeting.

Turning his attention to the current settlement efforts in Cyprus, Mr Karaolis said that “despite the positive signals coming out of the talks between President Anastasiades and the Turkish Cypriot leader Mustafa Akinci, Turkey and Erdogan are sending their own messages that undermining the talks and seek to upgrade the pseudostate.”

The Federation President also urged members of the Greek Cypriot community to get even more involved in the British political parties, to amplify the communities voice in decision making centres. He then stressed the need for UK Cypriots to actively support, and vote for, the “In” campaign in the upcoming EU referendum as Britain’s and Cyprus’s interests were best served by the UK continuing to be an active member of the EU.

Community Greek schools and the Byzantine Choir also performed a selection of songs, poems, dances and performances as part of the community-wide National day celebrations.