Federation statement on UK General Election on 7th May 2015 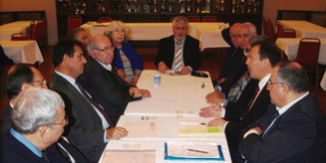 The forthcoming UK General Election on 7th May 2015 represents a unique opportunity for UK Cypriots to exercise their democratic right and to vote for the party and parliamentary candidate of their choice. We urge all Cypriots in the United Kingdom eligible to vote in the General Election to do so. British Cypriots should first ensure that they are registered to vote: you have until the 20th April to register, if you are not already on the electoral register*.

Importantly for UK Cypriots, this election comes at a sensitive time for Cyprus with negotiations to rid the island of Turkey’s military occupation and to reunite the country due to recommence. The UK is a Guarantor Power of the independence and territorial integrity of the Republic of Cyprus and has important responsibilities by virtue of that role, as well as through its permanent membership of the United Nations Security Council and as a leading member of the European Union and the Commonwealth, not to mention the responsibility of all states to uphold international law and human rights.

The General Election is an opportunity for British Cypriots to raise the Cyprus problem’s profile on the political agenda of this country. For this brief period in the electoral cycle, all political parties will be seeking our views. The remaining days before polling are our chance to highlight the Cyprus problem repeatedly to those people who seek to represent us over the coming years and to seek to make it a priority on the foreign policy agenda of the new UK government. This is even more important at a time when so many new MPs are likely to be elected.

We have a responsibility as a community to make candidates from all parties aware of the plight of Cyprus and Britain’s historic responsibilities to the island and its people.

This election is also an opportunity for UK Cypriots to support Members of Parliament from all parties who are seeking re-election and who have a proven track record of working with us and supporting and promoting the cause of a reunited Cyprus in Parliament. We urge British Cypriots to vote for such candidates on 7th May 2015.

In conclusion, we call upon all British Cypriots to use the remaining critical period before polling day to inform, discuss with and lobby the people who seek our votes.

* Register to vote by going to www.gov.uk/register-to-vote