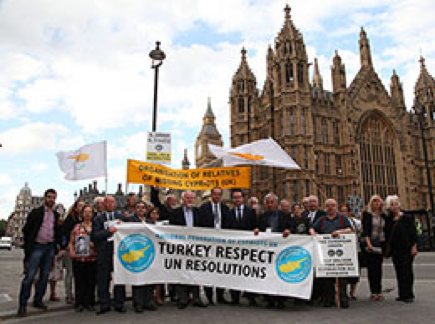 Christos Karaolis, President of the National Federation of Cypriots in the UK, opened the meeting by marking the 10 anniversary of the July 7th bombings in London, the recent tragic attacks in Tunisia and the plight of Cyprus’ missing.  He said “Our condolences, thoughts and sympathy go out to all the families of the victims of these terrorist attacks and the Missing.” Everyone then stood for a minute silence in their memory.

Christos Karaolis said:  “Given the recent referendum in Greece, I wanted to express our solidarity with the people of Greece. They expressed their democratic will on last Sunday and I hope that this will be respected by everyone, including our European partners – we all hope that a solution to Greece’s economic and financial problems can be found as soon as possible.”

He went on to extend a special welcome to Koray Basdogrultmaci and Cinel Senem Husseyin, two brave Cypriot patriots who made a stand against Turkey by waving the Cypriot flag in the occupied northern part of Cyprus outside their shop, and who after two years of unjust arrests and false charges were recently acquitted.

In his introductory remarks, Christos Karaolis said “Today, as British Cypriots we are gathered here in our Parliament to mark the tragic 41st anniversary of the illegal Turkish invasion and subsequent military occupation of the northern part of Cyprus and to demonstrate our unwavering commitment to ensuring that our island is finally reunified. As a third generation Cypriot, born here in the UK, I hope that my recent election as President of the Federation sends a signal that the Cypriot community here in the UK is not transient and that Cyprus issue is not one that will be forgotten with time.”

In closing he encouraged MPs to make a difference in relation to Cyprus. He said “This year, we ask you to be even more vocal because the talks currently under way between President Anastasiades and the Turkish Cypriot leader, Mustafa Akinci, represent a real opportunity for a breakthrough, if only Turkey would seize this opportunity and at long last respond to the good will and positive spirit.”

Contributions from parliamentarians were interspersed with questions from the audience throughout the evening but began with an address from the Rt Hon. Theresa Villiers MP. She said that she was fully committed to supporting Cypriots in their struggle to find a negotiated solution to a united Cyprus. She said the election of Mr Akinci, alongside President Anastasiades represented an opportunity for a breakthrough but the key lied in Turkey which needed to respond to numerous UN resolutions on Cyprus.

Speaking next, Sir Roger Gale MP said “It behoves us all to remember the missing. There are still mothers and brothers of the missing who need to find out what happened all those years ago. I have known Mustafa Akinci since he was Mayor of occupied Nicosia and his election gives me hope that a settlement can be reached. However a settlement will only be reached if it is in Turkey’s interests to solve the Cyprus issue.”

The Rt. Hon. Joan Ryan MP said “41 years is a long time for anyone to remain disappointed. The election of Mr Akinci represents an opportunity for a just and viable settlement to be reached that preserves a single citizenship and sovereignty, one united country that is in line with UN resolutions and high level agreements. She said that any solution must be negotiated by Cypriots with the support of guarantor powers and she would do everything she could to support Cypriots to find a just and sustainable settlement to the Cyprus issue.

David Crausby MP also expressed his solidarity with the people of Cyprus in their 41 struggle and expressed his hope that there would be a solution soon.

Sir Alan Meale MP said “Things are changing because of brave people in Cyprus and instability in Turkey and the wider Middle East. 41 years is a disgrace and we don’t seem to focus enough attention on the largest tragedy in Europe today – a divided Cyprus. He said that any solution needed to deal with the two humanitarian issues of the invasion – the return of refugees to their homes and the missing.

Tom Cox, former MP and long standing supporter of the Cyprus cause said he looked forward to real progress with Mr Akinci as the new Turkish Cypriot leader but said that the solution lied in Ankara. He argued that the only country that had any real influence over Turkey was the USA.

Also present were the Mayors of occupied Kerynia and Lapithos. Glafkos Kariolou, Mayor of occupied Kerynia, speaking on behalf of the Occupied Towns and Municipalities of Cyprus said that after 41 years of trying to find the missing it is becoming more and more difficult and encouraged Turkey to play its part by opening up military zones to the CMP. He also decried Turkey’s role in the Cyprus issue saying “It is becoming clear that the Cyprus issue is not one of Greek Cypriots vs. Turkish Cypriots but of Cypriots vs. Turkey”

Speaking for the first time since his recent acquittal for waving the Cypriot flag in the occupied northern part of Cyprus, Koray Basdogrultmaci said “In Cyprus there is no border, because to talk of borders is to talk of two separate legal entities. A solution will only come about if all Cypriots, Greek and Turkish Cypriots feel a sense of “Cypriotness” and that is why I support the Republic of Cyprus.”

Questions from the audience focused on what more could be done to end the 41 years without a resolution to the division and occupation of Cyprus, the return of the refugees to their homes and properties and the fate of the missing people.