UK Cypriots Demand an End to Turkey’s Injustices in Cyprus 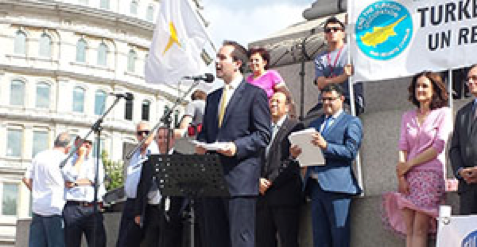 British Cypriots and politicians from across Britain’s political spectrum demonstrated in great numbers on Sunday, in a show of solidarity against Turkey’s intransigence over efforts to end its continuing illegal military occupation of the northern part of Cyprus. The National Federation of UK Cypriots’ annual rally at Trafalgar Square saw thousands of protestors make their voices heard to deliver a clear message to Turkey and to the British Government.

A petition was delivered to Prime Minister David Cameron, in which the newly-elected National Federation of UK Cypriots’ President, Mr Christos Karaolis, called upon Mr Cameron to apply leverage on Turkey to withdraw its occupying troops and to play an active and positive role in the new round of negotiations to reunite Cyprus for the benefit of all Cypriots. A letter of protest to the Turkish Ambassador to the UK was also delivered to the Turkish Embassy in London.

The annual London “Rally for Cyprus” was organised by the National Federation of Cypriots in the UK to mark the 41st anniversary of the illegal invasion of Cyprus by the Turkish army on 20th July 1974.

The keynote speaker at the event was Mr Nicos Kouyialis, Minister for Agriculture, Natural Resources and the Environment of the Republic of Cyprus. The Minister said that: “We Cypriots, refugees or not, are the only Europeans today who do not enjoy basic human rights in our own country because of the continuing Turkish military occupation. This is the brutal reality. We cannot move freely, settle and live in the occupied part of our island, or exercise our religious rights.”

He added: “I would like to state that with the assumption of the leadership of the Turkish Cypriot community by Mr. Mustafa Akinci, and the readiness displayed by all sides to reenter negotiations, we have entered a new phase, in which the prospects for an agreement for the solution of the Cyprus problem seem favorable.” He went on to say that any solution of the problem will put an end to the ‘turkification’ of our occupied lands, will reverse the flow of settlers, will rid our country from the occupation troops, and will create conditions for peace, unity, and development for the Cypriot people, across the whole island.

The rally in Trafalgar Square was also addressed by British politicians from the main parties.

In his introductory speech, Mr Christos Karaolis, President of the National Federation of Cypriots in the UK, welcomed and thanked all of those present, in particular Minister Kouyialis, the Mayors of the occupied towns of Kerynia and Lapithos, Theresa Villiers MP, Secretary of State for Northern Ireland and a member of the British Cabinet, the Greek Ambassador to the United Kingdom, Mr Konstantinos Bikas, the Cyprus High Commissioner to the UK, Mr Euripides Evriviades, and members of the British and European Parliament and the Greater London Assembly: Kate Osamor MP, Charles Tannock MEP, Mary Honeyball MEP and Andrew Dismore AM.

After welcoming the rally, Mr Karaolis called upon the international community to act on Cyprus. He said:
“Today we remind the world of the utter injustice of the continuing division of Cyprus, the disgrace of a divided capital in a united Europe. Today we also welcome the choice of Mr Mustafa Akinci as the new leader of the Turkish Cypriot community as a positive sign which gives hope to all Cypriots that the island may at long last be free. However the question as to whether or not Cyprus can turn a new page will depend on Turkey’s willingness to remove its army of occupation and settlers from the territory of the Republic and on its sincere engagement with the UN-facilitated processes”.

“The tragedy of Cyprus is compounded because the will of the United Nations has been defied, with complete impunity, by successive Turkish governments, for 40 years, which makes today an anniversary of failure too – the failure of the international community to hold Turkey to account. So we call upon Britain, which has moral and treaty obligations to Cyprus, and upon the European Union, to put pressure on Turkey to help deliver a free, united Cyprus for all Cypriots. And we ask Britain and Europe to make it unequivocally clear to Turkey that it will never join the EU unless it leaves the island.

“Forty years on, the flame of liberty in our hearts still burns; it will not be extinguished; our hope endures; the dream lives on; the struggle continues and will not stop until the bells of freedom ring from every corner of the island.”

Glafkos Kariolou, Mayor of occupied Kerynia, speaking on behalf of the Occupied Towns and Municipalities of Cyprus, highlighted the need to work with the newly elected Turkish Cypriot leader, Mr Akinci to develop a solution that included the immediate removal of Turkish troops and settlers from Cyprus and noted that while a solution was desired by virtually all Cypriots, any settlement must safeguard the unity of the state and the peaceful co-existence and prosperity of all Cypriot citizens in their own country. He added his deepest thanks to British Cypriots and the Federation for their efforts in pressing for an end to the division of Cyprus.

Charles Tannock, a Member of the European Parliament for London, told the rally that there was a renewed momentum in Cyprus for a solution with two leaders that shared the same vision for a united Cyprus. He cautioned however, that reaching a solution will require Turkey’s active engagement and to date this had not been forthcoming.

Mary Honeyball, a Member of the European Parliament for London, told the rally that “we must continue to fly the flag of hope and be positive”. She said there seemed to be real prospects for peace and reunification on the island and was a looking forward to talking about a united Cyprus free from division.

Kate Osamor MP spoke of how Cyprus “deserves justice, as a member of the European Union, the Commonwealth and the United Nations” and expressed her solidarity with the people of Cyprus in their struggle to find a just and sustainable solution to the ongoing division.