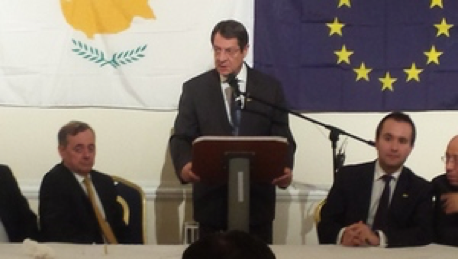 British Cypriots demonstrated their solidarity and support for President Anastasiades at a dinner in his honour organised by the National Federation of Cypriots in the UK, held at the Greek Cypriot Brotherhood in London. President Anastasiades came to London to meet with the British Prime Minister, David Cameron, on his way to the UN General Assembly in New York.

Amongst other guests at the dinner, were the Government Spokesman of the Republic of Cyprus, Nicos Christodoulides, the High Commissioner for Cyprus, Evripides Evryviades, the Ambassador of Greece, Konstantinos Bikas and the Bishop of Tropaeou, Bishop Athanasios.

President Anastasiades briefed the Secretariat of the Federation and the leaders of the associations of the Federation about the latest developments in the negotiations, touching upon specific chapters of the talks. He also highlighted the need for Turkey to show the necessary goodwill and send clear signals, through specific actions, to enhance the ongoing settlement process.

President Anastasiades said that the Turkish Cypriot leader, Mustafa Akinci, and he share the same vision of Cypriots being in charge of their island, of Cyprus being reunited and of human rights being guaranteed, with all Cypriots being equal citizens of the EU.

Recognising this reality, noted the President helps to create an essential personal relationship which permits a more candid dialogue. “The atmosphere has indeed been different after Mr Mustafa Akinci became leader of the Turkish Cypriot community and the talks, even though we are still in the primary stages, have achieved some progress on important chapters,” added Mr Anastasiades.

President Anastasiades also expressed his delight at the presence of several representatives of the younger generation of NEPOMAK at the event, along with the older generation, commending the unity of the diaspora in terms of actions to promote the settlement of the Cyprus issue.

Welcoming President Anastasiades to London, the President of the National Federation of Cypriots, Mr Christos Karaolis said “The progress and rapport that you have developed with the Turkish Cypriot leader, Mr Mustafa Akinci, over the last 6 months gives us all a sense of cautious optimism that we might soon have a solution that removes the Turkish troops and settlers from the island, respects the human rights of all Cypriots and reunites our beloved island so that all Cypriots, Greek Cypriots, Turkish Cypriots, Maronites, Armenians, Latins, can live and prosper together.” He also commended President Anastasiades on his “perseverance, patience and determination” in safeguarding the human rights of all Cypriots.

Christos Karaolis went on to express the solidarity of British Cypriots with President Anastasiades saying “I want to reassure you that the Federation and the community will stand by your side ready to assist in our collective mission to deliver what all Cypriots want – a free united Cyprus.”  He also referred to the important role that the UK has with regard to Cyprus and noted that the community will carry on demanding from British MPs and the government to fulfil their country’s responsibilities as a guarantor power.