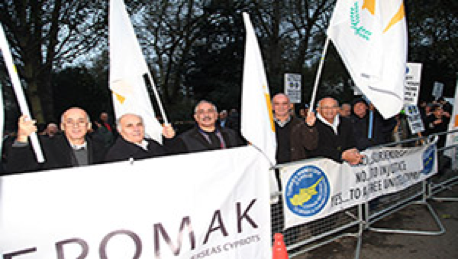 Picketing the Turkish Embassy in London on Sunday 15 November, a vocal demonstration, organised by the National Federation of Cypriots in the UK, made itself heard despite the Embassy’s refusal to recognise the protest, or to engage in dialogue with British Cypriots. British Cypriots made their voice heard outside the Embassy condemning the illegal declaration of the pseudo-state and calling on Turkey to remove its troops from Cyprus and to honour its obligations to Europe and Cyprus.

This year marked the 32nd consecutive year of the picket outside the Turkish Embassy on the black anniversary of the illegal Universal Declaration of Independence. The declaration was condemned by UN resolutions 541 and 550 and the illegal state has not been recognized by any country except Turkey. At this year’s picket participants also held a 1 minute silence as a mark of respect for the victims of the ISIS attacks in Paris and all Cypriots who sacrificed their lives for Cyprus’ freedom.

During the picket, the President of the National Federation of Cypriots was joined by the President of POMAK, Officers and Members of the Federation’s Executive, the President of NEPOMAK and the President of EFEK (Cypriot Students in the UK) to deliver a resolution to the Turkish Ambassador. The letter of resolution demanded the withdrawal of the Turkish occupying army and the Turkish colonists illegally transferred by Turkey to the north of Cyprus and called on the Turkish government to abide by the resolutions of the UN Security Council, the European Union and international law. This year, however, the letter also urged Turkey to respond with positive actions to encourage progress in the direct negotiations taking place on the island towards a just and lasting settlement. The resolution also called upon Turkey finally to resolve the terrible human tragedy of the Cypriot people who went missing during its invasion of the island in 1974.

Federation member associations, NEPOMAK and EFEK showed their resolve against the illegal occupation and the self-proclaimed pseudo-state, which remains unrecognised by all countries in the world except Turkey.

“We know that Turkey sustains and controls this illegal and unrecognised regime: for more than three decades, the so-called ‘TRNC’ has been a symbol of Turkey’s bullying behaviour, representing a threat to peace, security and stability on the island and in the region. As we all know the question as to whether or not Cyprus can turn a new page will depend on Turkey’s willingness to remove its army of occupation from the territory of the Republic of Cyprus, and on its sincere engagement with the UN-facilitated process. We call upon Turkey to end its intransigent policy towards Cyprus and with concrete actions respond to the positive momentum in Cyprus for a solution”.