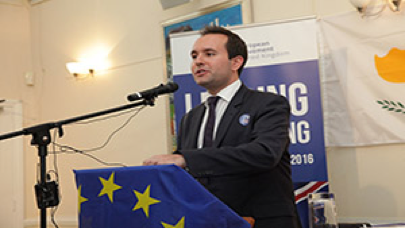 The President of the National Federation of Cypriots in the UK, Christos Karaolis, today called on the UK Cypriot diaspora to turn out in favour of Remain in the EU Referendum. He said that Europe mattered to all communities regardless of faith, religion, gender or ethnicity and that the UK’s place is at the heart of the European Union: “It is in the best interests of our country, Europe and indeed Cyprus. Our membership of the European Union over the last 43 years has strengthened the UK’s security, boosted prosperity with jobs, trade and investment and enshrined protections for workers and women. The European Union also upholds the same principles that we do – liberty, human rights, equality and justice”.

Mr Karaolis added that a vote to leave the EU would damage Cyprus and urged his fellow UK Cypriots to use their crucial vote to reject Brexit. “Cyprus is one of the UK’s top 50 trading partners and the UK is Cyprus’s second biggest trading partner. However, it is not just trade and tourism that would be impacted. 10,000 Cypriot students study in the UK every year and many stay on afterwards and the UK has consistently been a strong ally of Cyprus in the European Council and its committees.”

He went on to emphasise the importance of the Cypriot community’s vote today saying “Let’s not be under any illusions. Today we are voting for Britain’s future and our family’s future. The vote of our diaspora is crucial today, so please make your vote count and vote to Remain in the European Union.”