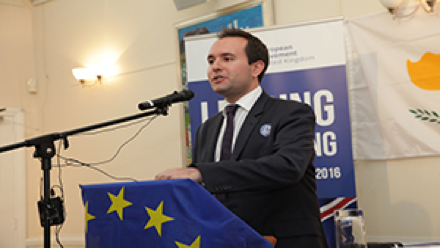 British politicians from the major political parties addressed a UK Cypriot audience at the Greek Cypriot Brotherhood, in north London, on Tuesday evening in a remain campaign event organised by the National Federation of Cypriots in the UK and the European Movement ahead of the 23rd June referendum.

The open meeting was attended by the Secretary of State for Education Nicky Morgan who urged UK Cypriot voters “not to turn their backs” on the EU. Cypriot citizens living in the UK are eligible to vote in the EU referendum as Commonwealth citizens, thus being one of the three EU nationalities apart for the British who will have a say in deciding the UK’s European future (along with the Maltese and the Irish).

The Education Secretary urged UK Cypriots not to let anyone else make the decision for them and turn out to vote. She said that for her supporting Remain is a very straightforward choice: for a better future for the young people, for the cooperation with EU partners on security and on sharing intelligence, but also on tackling climate change, human trafficking and other shared challenges. “Britain is an outward facing nation; we play our part in the world, we work with others to tackle the problems that we face,” said Ms Morgan.

She concluded by noting that the crucial vote is “about the country’s future for decades to come and about a statement on the UK’s place in the world and the role we want to play as a country.”

The former Health Minister and Liberal Democrat MP Norman Lamb said that he does not consider himself to be “a starry-eyed supporter of the EU”, nevertheless he opposes Brexit because he recognises the diversity and contribution to the British society and economy made by EU migrants; because “an absolute wealth” of independent experts at home and abroad have unequivocally opined that it is not in the best interest of the UK to leave the EU and because the future of the whole continent is at stake. “We live through very dangerous times with a lot of threats. We would not be able to better confront these challenges alone,” noted the Liberal Democrat MP.

Shadow Foreign Minister, Trustee of the APPG for Cyprus and Labour MP, Catherine West called upon the UK Cypriots and the rest of the voters to “stand up for our values: for tolerance, workers’ rights, a better future and peace.” Her fellow Labour MP and Secretary of the APPG for Cyprus, Sir Alan Meale criticised the Leave campaign for using “thoroughly unpleasant and disgraceful” arguments against EU migration, most of which he described as “racist”. He added that Brexit would cause an “immense recession the scale of which will not have been seen since the 1920s” and urged the UK Cypriot diaspora to turn out at the polling stations and help the UK remain in the EU.

Conservative MPs Sir Roger Gale (Chairman of the APPG for Cyprus) and Mike Freer (Officer of the APPG for Cyprus) who were not able to attend sent messages urging the Cypriot community to vote for remain in the EU referendum. Sir Roger noted that although he is a Eurosceptic, he will be voting for Britain to remain within the European Union as he believes it is in the interests of the security and the economy of the UK. He added that the UK remaining as a member of the EU would also be in the best interest of Cyprus “given particularly developments in Turkey and the present regime in that country coupled with the massive concerns over the future of migration within the Mediterranean and the wider Europe.”

In his speech the President of the National Federation of Cypriots in the UK, Christos Karaolis, said that the UK’s place is at the heart of the European Union: “It is in the best interests of our country, Europe and indeed Cyprus. Our membership of the European Union over the last 43 years has strengthened the UK’s security, boosted prosperity with jobs, trade and investment and enshrined protections for workers and women.”

Mr Karaolis added that a vote to leave the EU would damage Cyprus and urged his fellow UK Cypriots to use their crucial vote to reject Brexit. “Cyprus is one of the UK’s top 50 trading partners and the UK is Cyprus’s second biggest trading partner. However, it is not just trade and tourism that would be impacted. 10,000 Cypriot students study in the UK every year and many stay on afterwards and the UK has consistently been a strong ally of Cyprus in the European Council and its committees. So what message would we be sending back to Cyprus if, as a community, we voted to leave the European Union?” he asked. Closing the event he said “Let’s not be under any illusions. The vote of our diaspora is crucial in the EU referendum on June 23, so please make your vote count and vote to Remain in the European Union.”

Also in attendance was the High Commissioner of Cyprus, H.E. Evripides Evriviades, the Deputy Chairman of the Conservative Party in London, Kishan Devani, the former MEP, Marina Yannakoudakis and President of POMAK, Andreas Papaevripides.